Winter may go, discontent will linger

A succession of such tumultuous events came like wave after wave of a political tsunami. 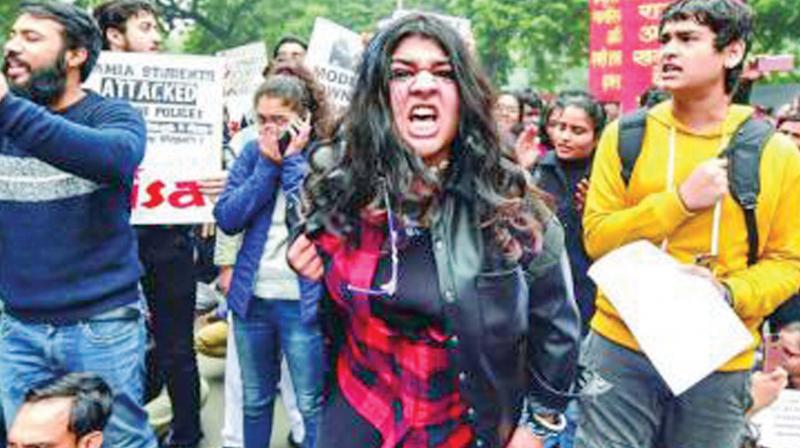 The stir against CAA had hardly died down when the BJP introduced the National Population Register.

The British queen called 2019 “quite bumpy” and urged Britons to “overcome long-held differences and deep-seated divisions". Nothing goes without an immediate response these days and at once the talk in UK government circles was about the costs of keeping British royalty in clover. But the “quite bumpy” comment of Elizabeth II has an authentic ring to it. What she said of a Brexit-obsessed Britain could be said of the world too in the last year of the “TwentyTens”, a contentious decade of the new millennium.

It would be an understatement to say India had a bumpy ride through 2019. But it didn't appear as if the rollercoaster had started yet when at the beginning of the year the general elections were in focus and all the talk had been on whether Narendra Modi-led BJP and BJP-led NDA would return to power or would it make way for the motley Mahagathbhandan led by the Congress. Let's just say that the Pulwama attack and the Balakot counterattack, better known as “Surgical strike”, changed everything.

The rest is history, as they would say, and it should at least have been so because of a historic verdict that saw the BJP return with a bang and bigger numbers than in 2014. The least expectation then would have been that the government would work for the welfare of the people and tending to the state of the economy would have been the focus. But no, the Modi 2.0 regime took out its political agenda, first the abrogation of Article 370 in Jammu & Kashmir.  This was within two months of assuming office

And then came the Supreme Court with its fast-tracked verdict on the Ram temple. Things couldn't have got more political within months of the regime. All thought of the economy gaining priority disappeared and it only got worse before the year got over. The passing of the Citizenship (Amendment) Bill that became an Act in CAA saw all hell breaking loose. A succession of such tumultuous events came like wave after wave of a political tsunami.

I have heard it said, in succinct manner that while the “Congress is a master at deception, BJP is a disaster at perception.” So true considering how Congress got away while toying with much the same citizenship or residency proposals but piles on the blame whenever BJP expands on original Congress proposals, but with an agenda that is too close to Hindutva ideals. The BJP’s injured innocent act just doesn't come through well enough because their motives are always suspect and worse they are made out to be sinister by the Opposition and that seems to cut ice with the people.

The stir against CAA had hardly died down when the BJP introduced the National Population Register. This is either very poor timing or an arrogant attempt to thrust their agenda even at the cost of huge unpopularity building up in the strength of the protests that are simply not going away. Regimes on stronger footing than the current one have been displaced in national general elections on swings of the public mood. In Tamil Nadu, we saw such a mood swing in the mid 1960s after which the Congress has not been able to win a seat on its own and if it does not ride piggyback on one Dravidian major or the other.

Alienating students can be tricky, particularly in the long term as first time voters tend to remember things and they are going to be exercising their franchise for a long time in their lives. To dismiss them as irrelevant in the short term may be political strategy, but going after them as the police have been shown to be in campuses like AMU and Jamia Milliah Islamia can only lead to disenchantment of the young.

Let’s not even believe for a minute that these were accidents of strife in which the forces of the authorities responded by bloodletting on protesters, and not only with lathis wielded with a kind of relish that invariably signifies authoritarianism and regardless of who is in power. Police brutality is no new phenomenon though.

Very angry citizens have been on the streets of several cities around the world in 2019, pointing to the establishment's failure to heed the voice of protest and the rationale of dissent. Coming as it does against a background of economic uncertainty and job losses and such, it points to a sense of exclusion. “Pessimism about the future and a feeling of having lost control to unaccountable elites,” as historian Jack Werner of the University of Chicago put it. Having studied the pattern of protests, he concludes, “What changed is that elite unaccountability has been exposed, because popular forces are no longer aligned with elites as they once were.”

This should be food for thought but knowing what we are up against in India, the protests will only run into a wall and the first thought of the regime has been revenge, and a couple of the biggies have said so in public too. Given the circumstances, the scenario is somewhat uncertain as we leave a momentous decade behind and are about to enter another. It's something of a pity that the two politicians of the year who surprised everyone by defying anti-incumbency and such other pedantic electoral definitions to stay in power. And they had the most impressive mandate since 1984 to build on.

(R. Mohan is the Resident Editor of the Chennai and Tamil Nadu editions of Deccan Chronicle)