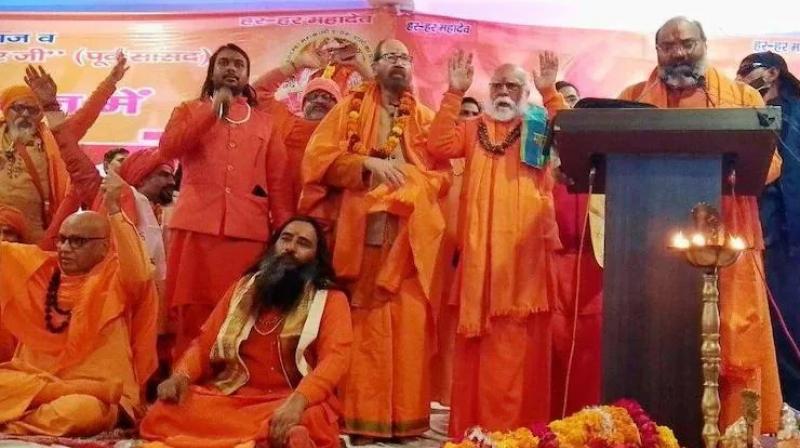 Dharam Sansad was held at Ved Niketan Dham in Haridwar for three days from December 16 to 19. (Photo: Screengrab)

Haridwar: A five-member Special Investigation Team (SIT) has been constituted to probe the case of alleged hate speech delivered during 'Dharma Sansad' held in Haridwar.

Garhwal Deputy Inspector General (DIG), Karan Singh Nagnyal said, "A 5-member SIT has been constituted under an SP-level officer to probe the matter of the Dharma Sansad hate speech case in Haridwar. Legal action to be taken against those found guilty."

Meanwhile, the Haridwar Police have added the names of Hindu leaders Yeti Narasimhanand and Sagar Sindhuraj in an FIR in connection with the case of alleged hate speech.

"On the basis of the viral video clip, two more names, Sagar Sindhu Maharaj and Yati Narsinghanand Giri have been added to the FIR in the Dharma Sansad hate speech case, upon further investigation. Section 295A has been included in the FIR," said Ashok Kumar, Director-General of Police, Uttarakhand.

Earlier, the police had informed that Dharm Das, Annapurna, Wasim Rizvi aka Jitendra Tyagi, and some others have been booked under Section 153A of the Indian Penal Code in the case.

After going through the clips, police have also added Section 295 (destruction, damage, or defilement of a place of worship or an object held sacred, with intent to insult the religion of a class of persons) of the Indian Penal Code to the FIR. The Dharma Sansad in Haridwar was held on December 17-19.

Uttarakhand Police registered an FIR against Rizvi, who was the former chairman of the Uttar Pradesh Central Shia Waqf Board, under Section 153A of the IPC (promoting enmity between different groups on grounds of religion) related to the statements made at the event.

It is pertinent to note that After Rizvi was "expelled" from Islam, the former Uttar Pradesh Shia Waqf Board Chairperson converted to Hinduism last month.

The addition of names to the FIR came to light after videos of Hindu leaders making provocative speeches and inciting violence against minority communities surfaced on social media. The speech was broadcast live on Facebook.