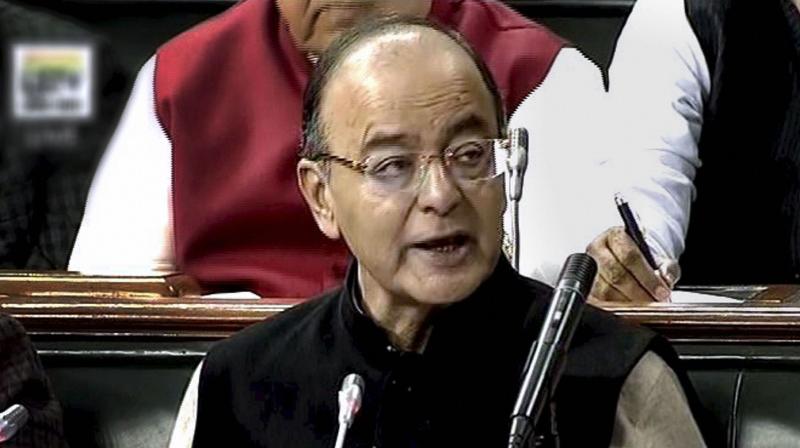 New Delhi: Coming down on black money, Union finance minister Arun Jaitley on Wednesday said that no cash transaction over Rs 3 lakh will be permitted. He also proposed a new legislation to confiscate the assets of economic offenders fleeing the country to escape the reach of law. A Special Investigation Team (SIT) set up by the government for black money had recommended that no transaction above Rs 3 lakh should be permitted in cash.

“The government has decided to accept this proposal. Suitable amendment to the Income-tax Act is proposed in the Finance Bill for enforcing this decision,” said Mr Jaitley while presenting the Union budget. Those who are found  guilty of the new rule a penalty equal to the amount of such receipt is proposed to be leviable.

“In India, the quantum of domestic black money is huge which adversely affects the revenue of the Government creating a resource crunch for its various welfare programmes. Black money is generally transacted in cash and large amount of unaccounted wealth is stored and used in form of cash,” said M. Devaraja Reddy, President, The Institute of Chartered Accountants of India (ICAI) on measures to curb high cash transaction.

Mr Jaitley proposed to limit cash donation that can be received by a charitable trust from Rs 10,000 to Rs 2,000. Finance minister said that in the recent past, there have been instances of big time offenders, including economic offenders, fleeing the country to escape the reach of law. “We have to ensure that the law is allowed to take its own course. Government is therefore considering introduction of legislative changes, or even a new law, to confiscate the assets of such persons located within the country, till they submit to the jurisdiction of the appropriate legal forum,” said the finance minister.

He said  that all necessary constitutional safeguards will be followed in such cases. Recently some high profile businessmen have fled the country to escape the law. Government will soon introduce a new law to protect gullible investors from Ponzi scheme frauds unleashed by entities running illicit deposit schemes in the name of multi-state cooperative societies. Mr Jaitley said government is considering the option of amending the Negotiable Instruments Act suitably to ensure that the payees of dishonoured cheques are able to realise the payments.

Finance minister said that after demonetisation, the government is analysing the cash deposits of old currency of Rs 500 and Rs 1,000. “This data mining will help us immensely in expanding the tax net as well as increasing the revenues, which was one of the objectives of demonetisation,” said Mr Jaitley. He said that during the period between November 8 and December 30, 2016, deposits between Rs 2 lakh and Rs 80 lakh were made in about 1.09 crore accounts with an average deposit size of Rs 5.03 lakh. Deposits of more than Rs 80 lakh were made in 1.48 lakh accounts with average deposit size of Rs 3.31 crore.