I am sure the New India which we aspire to create will emerge now, says Arun Jaitley. 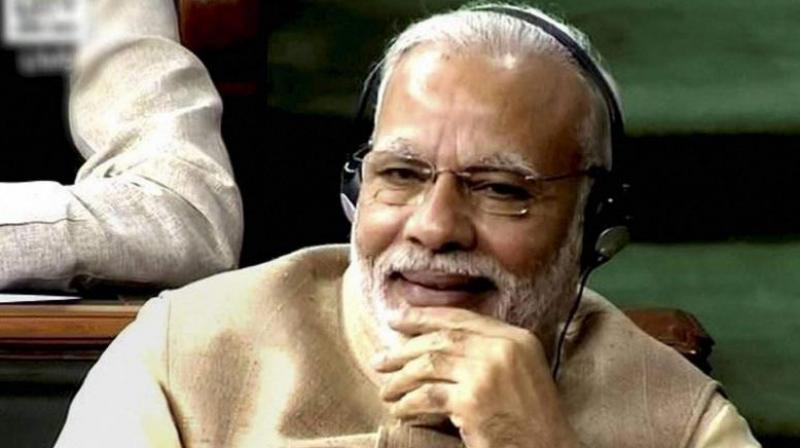 Prime Minister Narendra Modi termed the Union Budget ‘development-friendly’ and said it would strengthen the vision of a ‘new India’. (Photo: PTI)

New Delhi: In what is seen as an election-eve budget, Union finance minister Arun Jaitley on Thursday tried to woo politically crucial groups — farmers, the poor and women — with a slew of announcements including a Rs 5 lakh health insurance coverage scheme that will cover 500 million people. At the same time, he taxed the rich by introducing a 10 per cent long-term capital gains tax on stock market gains above Rs 1 lakh, which will result in tax revenue of Rs 20,000 crores in 2018-19 and Rs 40,000 crores the next year.

Mr Jaitley defended this move, saying that it was an opportune time to do it as Rs 3,67,000 crores of long-term capital gains funds were left untaxed last year.

Winning the support of farmers, rural India and the urban poor is crucial for the BJP in view of the Assembly polls that lie ahead in eight states in 2018 and the Lok Sabha elections in 2019.

“This Budget is farmer friendly, citizen friendly, business environment friendly and development friendly. It will add to the ease of living,” said Prime Minister Narendra Modi.

To this end, Mr Jaitley announced plans for “the world’s largest government-funded healthcare programme” that aims to benefit 100 million poor families by providing coverage of upto Rs 5 lakhs per family per year for secondary and tertiary care hospitalisation.

The small and medium industries sector, which is a major employer in informal sector across the country, and which had been badly hit by the twin blows of GST and demonetisation, also got special relief, with Mr Jaitley reducing corporate tax to 25 per cent for businesses with a turnover of up to Rs 250 crores and setting a target of Rs 3 lakh crores for lending under the Mudra scheme for small businesses in 2018-19.

With farmers in Uttar Pradesh, Gujarat and Maharashtra complaining of not getting a sufficient price for their produce, Mr Jaitley announced that all crops will get a minimum support price (MSP) that is at least one-and-a-half times the cost involved as promised in the BJP’s poll manifesto. He hiked the Budget allocation for the agriculture ministry by 13 per cent to Rs 58,080 crores and raised the farm credit target by Rs 1 lakh to Rs 11 lakh crores for 2018-19. 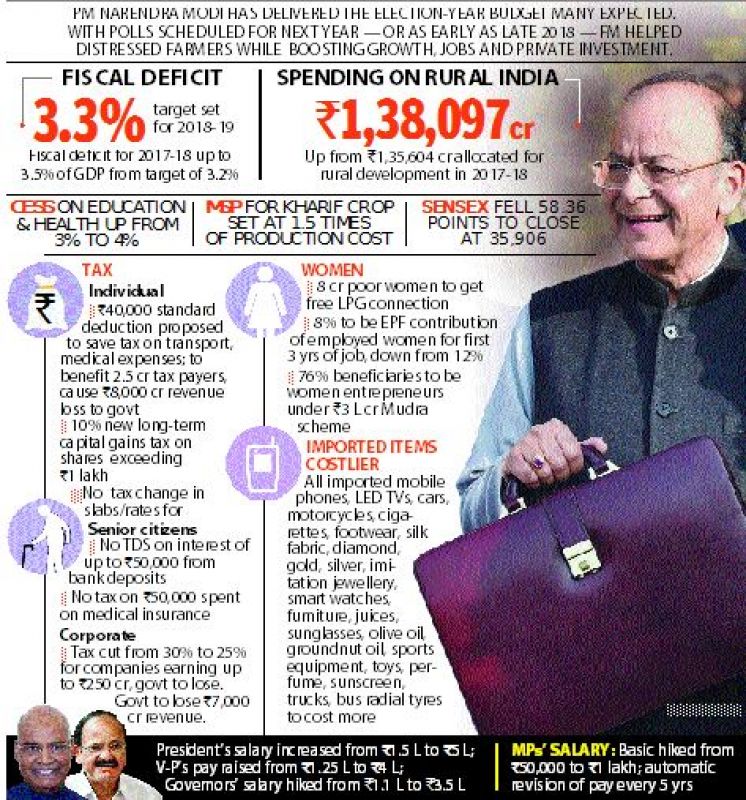 He announced plans for an increase in the free LPG quota for poor women, connecting more villages to electricity by spending Rs 16,000 crores and building houses in rural areas.

Due to hiccups in GST and a fall in non-tax revenue, the fiscal deficit target for 2017-18 will overshoot to 3.5 per cent of GDP, against the target of 3.2 per cent. For 2018-19, the deficit target has been set higher, at 3.3 per cent, against the Fiscal Responsibility and Budget Management Act target of three per cent.

The Budget left the salaried class high and dry as gains from the introduction of Rs 40,000 standard deduction was taken away from the proposal to increase the education and health cess on income-tax by one per cent. It was widely expected that the middle class will get some relief in income-tax as it was severely hit by the increase in tax on services under GST.

The finance minister said that growth at 6.3 per cent in the second quarter signalled a turnaround of the economy, and that the country was now firmly on course to achieve highgrowth of eight per cent-plus.

To push growth, Mr Jaitley announced an allocation of Rs 5.97 lakh crores for 2018-19 for infra spending, up by over Rs 1 lakh crore from the ongoing fiscal.

“Infrastructure is the growth driver of the economy. Our country needs massive investment in excess of Rs 50 lakh crores in infrastructure to increase growth of GDP and integrate the nation with a network of roads, airports, railways, inland waterways and to provide good quality services to the people,” the finance minister said.

To reduce harassment of taxpayers, the finance minister announced that the government will amend the Income-Tax Act to reduce the interface between the I-T department and taxpayers by widening the scope of e-assessment. The assessment will be done in electronic mode, which will almost eliminate person to person contacts between tax officials and the taxpayer, leading to greater efficiency and transparency.