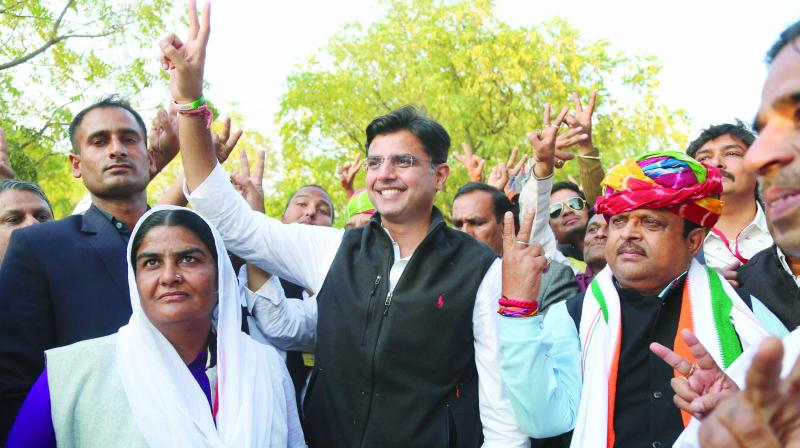 Jaipur: The Congress on Thursday wrested Mandalgarh Assembly seat and secured a massive victory in Ajmer and Alwar Lok Sabha seats in Rajasthan byelections, dealing a huge blow to BJP national president Amit Shah’s dream of making the party invincible in the state. All three seats were previously held by the ruling BJP.

She single-handedly ran the campaign, made frequent visits even before poll dates were announced and held closed-door meetings with people on caste lines and went on spree to announce sops and lay foundation stones. Yet the ruling party not just failed to retain a single seat, clearly suggesting a huge anti-incumbency against her government. The Congress, led by young state chief Sachin Pilot has been able to use it to its advantage. What must be heartening for the 40-year-old leader is that the party known for strong rural base is now also gaining in urban areas as shown by the latest results.

On Ajmer seat, the BJP failed to cash in on sympathy wave as Ramswaroop Lamba lost by more than 84,000 votes just six months after his father Prof. Sanwar Lal Jat’s death who had won this seat from PCC chief Sachin Pilot by 1.71 lakh votes in 2014.