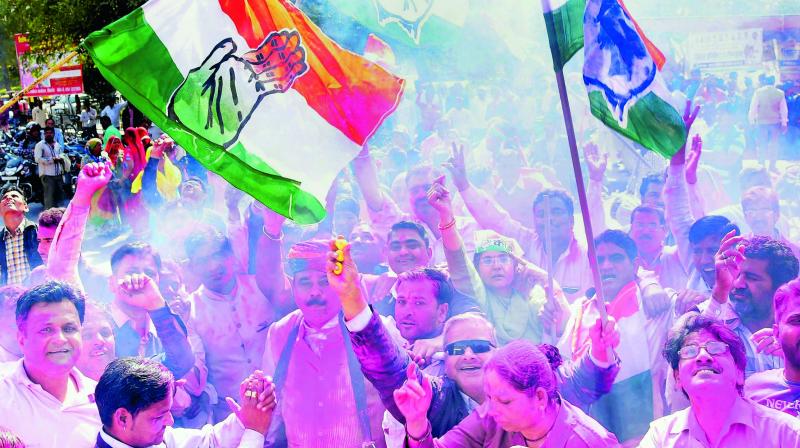 New Delhi: The BJP suffered a devastating blow as it faced a complete rout in five byelections held in Rajasthan and West Bengal. In Rajasthan, the citadel of saffron chief minister Vasundhara Raje, the Congress scored a hat-trick by bagging both the Lok Sabha and one Assembly berths, in West Bengal, the ruling Trinamul Congress retained the Uluberia Lok Sabha seat and wrested the Noapara Assembly seat from the Congress. After the byelection defeats, saffron poll managers have to decide whether to go with Prime Minister Narendra Modi as its main electoral draw in the coming Assembly polls or to give Ms Raje another chance in Rajasthan.

The BJP’s performance in the West Bengal bypolls also remained unimpressive despite former TMC stalwart Mukul Roy now being in the saffron fold. The BJP had hoped Mr Roy would help it to expand its organisational strength in the state, that had resoundingly relected Ms Mamata Banerjee’s TMC in the last Assembly polls. A shockwave has run through the BJP,

which is still recovering from its poor performance in Gujarat, home state of Prime Minister Narendra Modi. Polling for the two Lok Sabha seats — Ajmer and Alwar — and one Assembly seat, Mandalgarh, was held on Monday. The blow was severe for Ms Raje as the three seats were held by the BJP, including Ajmer, which the BJP had won by over 1.5 lakh votes.

The Congress is rapidly gaining ground in Rajasthan with its young turk Sachin Pilot in the driver’s seat.

“The results are a testament to the fact that the people of the state have rejected the anti-people, anti-farmer, anti-youth policies of the Vasundhara Raje-led BJP government,” Mr Pilot said. Charged up by the victory, Congress president Rahul Gandhi tweeted: “Well done Rajasthan Congress! Proud of each and every one of you. This is a rejection of the BJP by the people of Rajasthan.”

Accepting the verdict, the Rajasthan chief minister said: “We have worked tirelessly over the years with the people of Rajasthan as our centre of attention and shall work harder, with renewed fervour and dedication, taking our beautiful state to new heights... Our efforts shall continue and we will keep the welfare of the people of Rajasthan at the forefront, as democracy is ultimately for and of the people. I congratulate the winning candidates and welcome them to this celebration of democracy.”

Seen as a “semi-final” before the Assembly elections due by the end of this year, the bypoll results in Rajasthan have now put saffron poll managers in a big dilemma — whether to go into the coming Assembly polls with Prime Minister Narendra Modi’s face or give Ms Raje another chance. In West Bengal, the Mamata Banerjee-led ruling Trinamul Congress won both the Uluberia Lok Sabha seat and the Noapara Assembly berth.

A majority section in the ruling party in Rajasthan has been miffed with the CM’s “style of functioning” and claimed the results were a referendum on her leadership. The numerically-significant Rajputs have also been seething in the state, first over the “encounter” of gangster Anandpal, a fellow Rajput, and then over the Padmaavat film controversy Some Rajput organisations had announced that they would not vote for the BJP.

“The CM is perpetually in a defensive mode when the Opposition (Congress) hardly staged any major protest or took up any issue aggressively in the last four years. There were farmers’ protests, dalit atrocities including the Nagaur incident, a spurt in corruption cases, cow vigilantism incidents but it were others and not the Congress which raised them. People are talking about anti-incumbency”, said a senior BJP leader.