Referring to the Kasganj issue, Kurien again asked the party to give a notice on the issue. 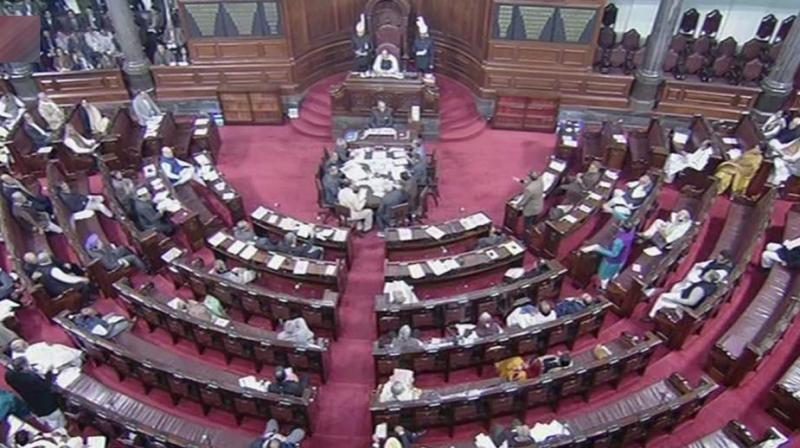 The newly-elected members of Aam Aadmi Party too were seen raising slogans in the well of the house, along with the SP members, against a sealing drive in the national capital. (Photo: PTI)

New Delhi: Noisy protests by Samajwadi Party members over communal clashes at Kasganj in Uttar Pradesh forced the adjournment of the Rajya Sabha on Friday morning.

The newly-elected members of Aam Aadmi Party too were seen raising slogans in the well of the house, along with the SP members, against a sealing drive in the national capital.

Congress member KVP Ramachandra Rao also entered the well holding a placard with the slogan ‘Help Andhra Pradesh’, though he did not utter a word.

Soon after the obituary reference was made for those killed in a road accident in Murshidbad district of West Bengal and the laying of the listed papers, Ram Gopal Yadav (SP) raised the Kasganj issue.

“Atrocities are being perpetrated against minorities in Kasganj... they are being supressed... houses are being vandalised,” Yadav said, as his party colleagues joined him in vociferously raising the issue.

Deputy chairman PJ Kurien asked the party to give a notice to raise the issue.

However, the SP members kept raising the issue from their benches and then trooped into the well.

Meanwhile, Kurien asked Rao to vacate the well and return to his seat, but the latter remained unmoved.

Kurien then asked leader of opposition Ghulam Nabi Azad to call Rao back to his seat.

“What is he (Rao) doing? Can somebody do like this? Has he gone mad? Please call him (back to seat),” Kurien said and even threatened action against Rao.

Referring to the Kasganj issue, Kurien again asked the party to give a notice on the issue. “I cannot ask the government (to reply on the issue). It is upto them,” he said.

He said 15 members wanted to raise issues during the Zero Hour which are to be taken up.

As the protests by SP and AAP members continued in the well, he said “this is unbecoming of members to come and shout slogans instead of giving notice”.

Following this, he adjourned the house till noon as the slogan-shouting continued unabated.

Communal violence had erupted in Kasganj on January 26 leading to the death of one person.