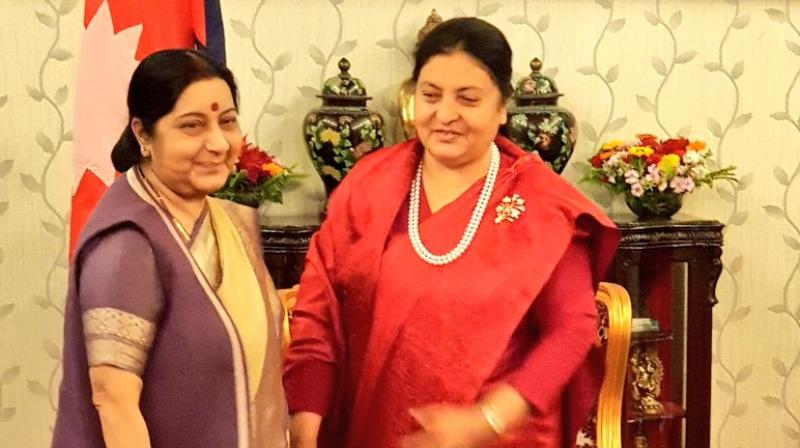 Kathmandu: External Affairs Minister Sushma Swaraj on Friday discussed ways to advance India's multi-dimensional and historic ties with Nepal and assured New Delhi's support for its political stability and development as she held wide-ranging talks with the country's top leadership.

"We will extend full cooperation to Nepal in attaining political stability and development," Swaraj said after her breakfast meeting with Prachanda.

"We discussed about the situation emerging after the conclusion of the elections and the preparation for formation of new government," said Prachanda, whose party formed Left Alliance with CPN-UML during the recently held elections in Nepal.

"I told Swaraj that we want political stability and development for which we need cooperation from the neighbours.

Swaraj assured that India will extend full cooperation to Nepal in its efforts towards attaining political stability and development," Prachanda said.

The Maoist chief said Swaraj was curious to know about the political developments taking place in Nepal.

"The talks we had were very positive and constructive. She also congratulated the Left Alliance for gaining victory during the recently concluded elections," he said.

"EAM @SushmaSwaraj met with Chairman CPN (Maoist Centre) Pushpa Kamal Dahal 'Prachanda of #Nepal and complemented him on his party's performance in the recent elections. The two leaders discussed steps to further deepen our unique India-

During her courtesy call on Nepal Prime Minister Deuba, she congratulated him on the successful conduct of the recent elections.

During her talks with Bhandari, Swaraj congratulated her on the successful conduct of election in Nepal.

Swaraj on Thursday held one-on-one talks with CPN-UML chairman KP Sharma Oli, who is likely to be the next prime minister, and prominent leaders of Madhesi parties.

Swaraj congratulated Oli for the victory of the Left Alliance in the recently concluded elections and expressed willingness to work with the new government.

Oli said his party is eager to work in collaboration with neighbouring countries and would forge partnership with India to move forward the country towards the path of economic prosperity, according to CPN-UML sources.

The clear victory to the Left alliance -- CPN-UML led by Oli and the CPN-Maoist led by Prachanda -- was not seen as a positive development for India given that Oli had publicly criticised New Delhi for interfering in Nepal's internal matters and accused it of toppling his government last year.