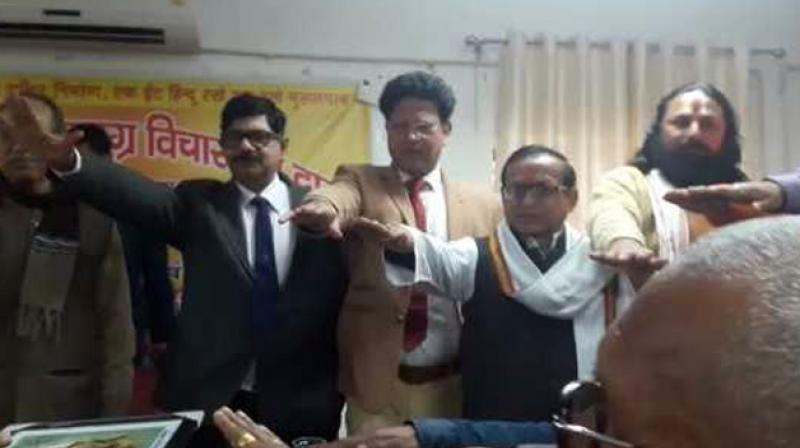 Surya Kumar Shukla, a 1982 batch officer of the UP cadre, allegedly raised his hand to pledge with others for the 'early construction of Ram temple in Ayodhya' on Jan 28. (Photo: Screengrab)

Lucknow: A senior Uttar Pradesh police officer has landed in controversy for pledging for ‘the early construction of Ram temple’ in Ayodhya.

In a video being widely shared, the director general (home guards), Surya Kumar Shukla, a 1982 batch officer of the UP cadre, allegedly raised his hand to pledge with others for the “early construction of Ram temple in Ayodhya” on January 28.

Shukla was attending an event organised by Akhil Bharatiya Samagra Vichar Manch at a private event held on the Lucknow University campus.

The video of the pledge has surfaced and is being shared widely on social media.

Shukla, wearing a grey blazer, is seen in the video standing to the left of the man who administered the pledge.

Shukla and others, in unison, are seen saying in the video:  (We all Ram-devotees, during this event, pledge for early construction of the Ram temple)”.

"Shukla is a public servant, and he is not supposed to take such a pledge at a public function," said Samajwadi Party spokesperson Rajendra Chaudhary.

The Yogi Adityanath government is learnt to have sought a report on the incident and the state home department has asked Shukla, who is due to retire next year, for an explanation.

Shukla admitted to participating in the event and taking the pledge, but said his words were misinterpreted. "I was taking a pledge to create an atmosphere of harmony. The video that has gone viral is an edited version and portions have been deleted deliberately to create mischief," the senior officer said, adding, "The matter related more to creating a peaceful environment for the construction of the temple rather than construction itself."

Speaking to the news agency ANI, Shukla said: "I had clearly said Ram Mandir issue is sub-judice, it won’t be appropriate to speak on it. The pledge was for communal harmony and not Ram Mandir."

The event was held in the auditorium of the department of public administration, Lucknow University, and was titled ‘Ram Mandir nirmaan: Samasya evam samadhaan (Ram temple construction: Problem and solution).

The event in Lucknow was held days before a three-judge Supreme Court bench headed by the Chief Justice of India starts final hearings to decide whether a temple to Lord Ram can be built in Ayodhya at the site where the Babri Masjid was razed in 1992. The court has said it will hold daily hearings from February 8 on petitions challenging a 2010 high court verdict on the Ayodhya title suit.

The Allahabad High Court had divided the disputed site in three parts -- one each for Hindu group Nirmohi Akhara, the Ram Lalla or infant Lord Ram represented by the Hindu Mahasabha, and the Sunni Waqf Board which handles properties owned by Sunni Muslims.