Farmers have demanded that the affected families should be either provided employment or give Rs 5 lakh as compensation for self-employment. 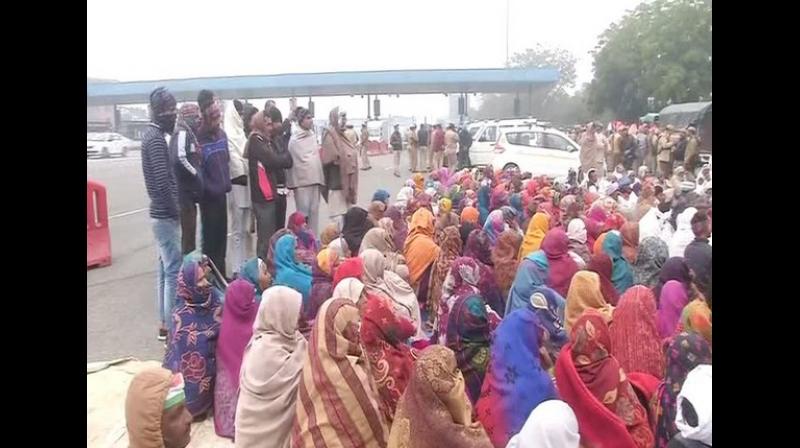 New Delhi: Scores of farmers blocked the Delhi-Noida (DND) flyway on Saturday, as they continued their agitation demanding fourfold compensation in lieu of their land acquisition.

The farmers assembled at the toll plaza in the morning at the flyway connecting national capital to Uttar Pradesh's Noida.

On Friday thousands of farmers from different villages of Gautam Budh Nagar district marched towards Delhi, raising slogans and causing severe disruption of traffic on the Delhi-Noida flyway which had to be then shut causing inconvenience to commuters.

The agitated farmers have alleged that builders, who took land from farmers, have laid the foundation stone for a degree college, but construction is yet to begin.

The protesters want that those farmers who did not sell their land to builders should be provided with a channel for passage of water for irrigation purposes. They also want immediate relief from the Income Tax department.

The farmers have demanded that the affected families should be either provided employment or give Rs 5 lakh as compensation for self-employment. Furthermore, they have demanded allocation of 100 bighas of land for Gram Sabha.

In November last year, more than one lakh farmers, belonging to 200 farmers' organisations, staged protests in different parts of Delhi to push their demands against rural distress, including implementation of the MS Swaminathan Committee report, farm loan waiver and better Minimum Support Price (MSP) for their agricultural produce.

On October 2, the birth anniversary of Mahatma Gandhi, farmers from the neighbouring states of Haryana and Punjab were not allowed to launch a protest in Delhi, which later led to a violent confrontation with the state police at the Delhi border.