India also agreed to extend assistance worth $5 million for vaccines and medicines to Jordan for the 1.3 million Syrian refugees it is sheltering. 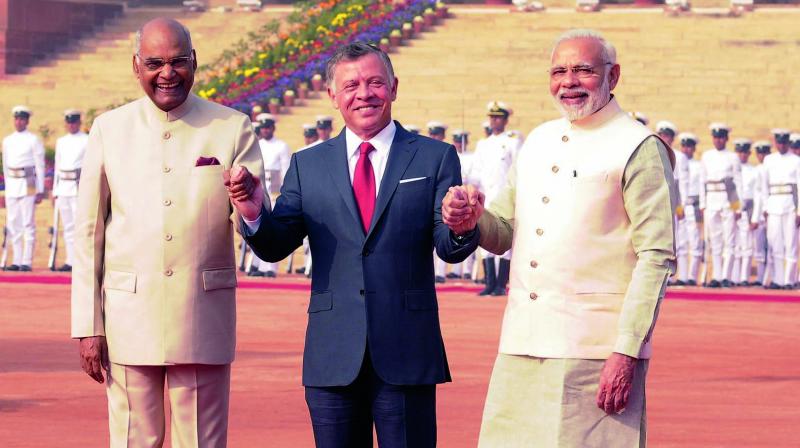 New Delhi: India and Jordan inked 12 pacts on Thursday in the capital after talks between Prime Minister Narendra Modi and King Abdullah of Jordan,  including a MoU on defence cooperation that envisages a framework for cooperation areas such as “training, defence industry, counter-terrorism, military studies, cyber security, military medical services and peace-keeping”. India also agreed to extend assistance worth $5 million for vaccines and medicines to Jordan for the 1.3 million Syrian refugees it is sheltering. India had given $ 2million last year. Interestingly, the Jordanian King, who has been a paratrooper and pilot of the Cobra military helicopters, was also given a “presentation” by the Indian side on India’s Advanced Light Helicopters (ALH) after a request made by him. However, senior officials of the ministry of external affairs (MEA) said there had been no move by Jordan so far to procure the ALH from India and that the presentation was given after interest shown in the helicopters by the King, a helicopter pilot. King Abdullah also visited the headquarters of the elite National Security Guard (NSG) at Manesar in Haryana near Delhi and was impressed by the capabilities of the elite counter-terror unit.

After talks between PM Mr Modi and King Abdullah, senior MEA officials said King Abdullah had expressed his appreciation for PM Modi’s stand-alone visit to Palestine when he transited through Jordan. The Jordanian King also told PM Modi that India has an “international role”. MEA officials said PM Modi apprised the Jordanian King about India’s efforts to provide economic assistance to African countries including a Line of Credit worth billions of dollars. Both countries agreed to cooperate on the matter of providing assistance to African countries.

The Jordanian King also supported enhancement of trade ties between the two countries.