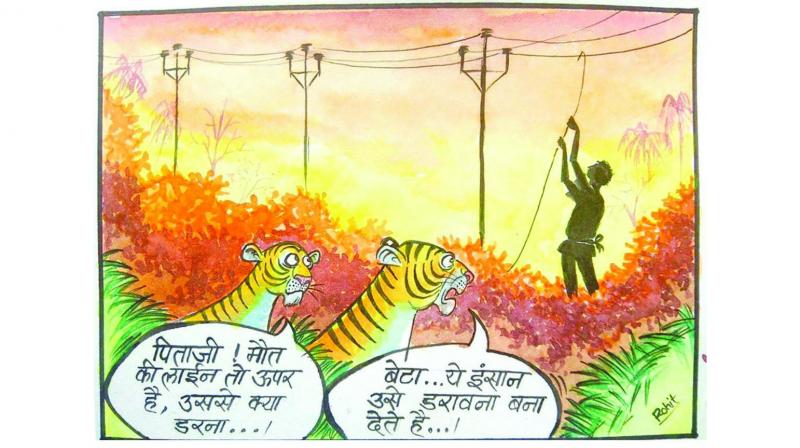 Stories using cartoons and caricatures like these are being used to highlight the urgency of wildlife conservation.

Bhopal: Wild animals have finally found a voice to demand conservation. A first-of-its-kind concept in which stories highlighting the urgency of wildlife conservation are told through cartoons and caricatures in social media has “hit the bull's eye”.

“The campaign launched in form of cartoons and caricatures in social media in the first week of March this year to generate awareness on wildlife conservation has drawn huge responses from people of all walks of life. The individual posts carrying such cartoons have attracted over one lakh likes in Facebook in barely three days of their release in the social media networking site,” additional chief conservator of forest (ACCF) of MP forest department Rajnish Singh, the brain behind the innovative initiative, told this newspaper.

“The concept has hit the bull's eye as our messages (on wildlife conservation) have spread like jungle fire on the social media,” he added enthusiastically.

Forest guard Rohit Shukla is the graphic designer of these cartoons and caricatures. Rohit, a post-graduate in Hindi literature, has a passion for graphic arts and wildlife conservation.

“The social media campaign is barely four-weeks-old but the response is amazing. We are confident that it will show results at the ground level helping wildlife conservation in coming days,”Mr Singh said.

He said the need for the campaign was felt as hoardings or signage put along national highways highlighting importance of wildlife conservation have often been overlooked by passers by. Similarly, the publicity in media in the form of advertisements have a limited shelf life.

“Messages circulated in social media platforms such as Facebook, Twitter and WhatsApp have in fact attained indefinite shelf life as they resurface at regular intervals, through likes and forwarding. Besides, the mediums has an unlimited reach,” he said citing instances of a few popular cartoon series going viral.

More importantly, the targeted population, living in and around forests, can be reached in no moment through the social media and explained through these visuals about the laws prohibiting killing of wild animals, Mr Singh said.

It has been observed that forest dwellers are often unaware that maiming a wild animal for self-defence is also an offence. Similarly, they hardly know that cutting a tree and setting the forest on fire to undertake shifting cultivation is a serious offence.

The cartoon campaigns, particularly elucidating forest laws, have been found to be yielding desired results gradually making the tribals aware that killing of wild animals even for self-defence is an offence.

A cartoon showed a cop threatening a poacher to put him behind the bar if he even dares to think of killing a tiger.

Similarly, a tiger was seen in a caricature reminding the local villagers who try to kill him for straying into their habitation that it was they who created the village by encroaching its area, the jungle.

According to Mr Singh, the FB posts have been evoking unusually good responses considering the likes and shares they have attracted.