India   All India  02 Apr 2018  Winning alliance eludes Congress in UP
India, All India

Winning alliance eludes Congress in UP

Party veterans say the Congress has to learn to walk it alone in Uttar Pradesh even if it means stumbling or slipping, initially. 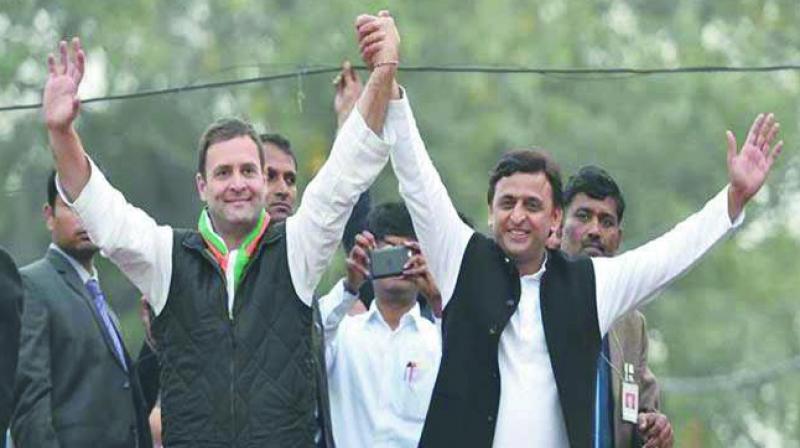 Lucknow: Political alliances for the Congress in Uttar Pradesh have always led it downhill in state politics. With eyes on the  2022 Assembly elections, state leaders have started voicing the need for party president Rahul Gandhi to avoid any tie-up if he wants to revive the outfit in the Hindi heartland.

Alliance politics of the Congress began after 1989 when it  was voted out of power and could win only 94 seats in the Assembly elections. Led by former Prime Minister Rajiv Gandhi, the Congress supported the Janata Dal government with Samajwadi Party (SP) founder Mulayam Singh Yadav as chief minister.

This was the same year when politics of coalitions began at the national level too.

In the 1991 elections, the Congress ended up with 46 seats. In 1993, only 28 party candidates won and the party supported the SP-BSP coalition government. Former Prime Minister P .V. Narsimha Rao led the Congress then.

In 1996, the Congress contested the Assembly polls in alliance with the Bahujan Samaj Party (BSP), which had moved away from the SP. This time the Congress won 33 seats but the BSP, after the polls, dumped the Congress and formed a coalition government with the BJP. Late Sitaram Kesri was the Congress president then.

A veteran Congress leader, who wished anonymity, said, “The slide started in 1989. Our mistake was to support other parties. When our voters saw that we supported other parties, they started voting for them directly, resulting in a dip in number of votes for the Congress. In 1996, the party organisation started breaking up because we contested 125 seats and left 300 for the BSP. The workers on these 300 seats had nothing to do and left Congress.”

In 2002, the Congress had to remain content with 25 seats and a year later (2003) when the BSP-BJP coalition broke up, the Congress again helped in propping up the Mulayam Singh government in Uttar Pradesh. This time, the Congress was led by Sonia Gandhi. 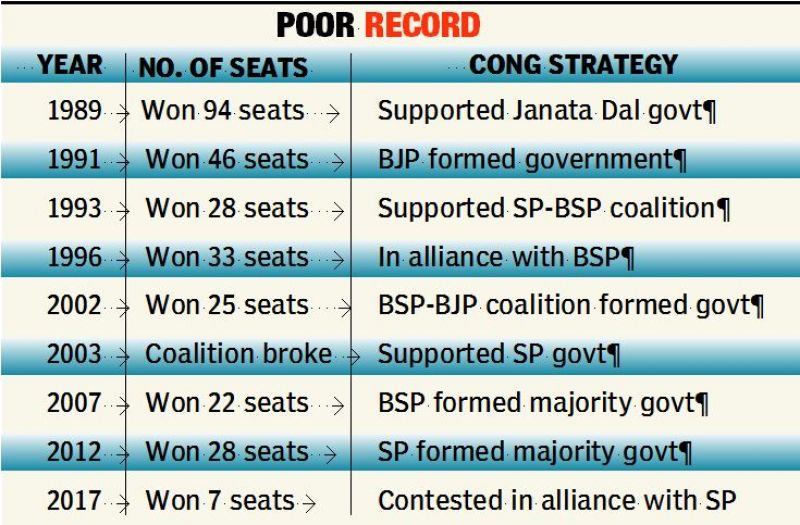 In the 2007 polls, the Congress was down to 22 seats, but rose slightly in 2012 when it got 28 seats. In 2016, the Congress managed to enthuse it cadres with the “27 saal, UP behaal” campaign and that convinced its workers that the party would, this time, go it alone.

However, three months after the campaign that had almost revived the party organisation, the Congress leadership, again, decided to enter into an alliance with the SP, a decision that boomeranged and the party hit the rock bottom. The Congress got a paltry seven seats in the 2017 Assembly polls.

Ram Bahadur Srivastava, a veteran Congress leader from Gonda district, said, “We may stumble, we may slip, but we have to learn how to walk it alone and not be a ‘political stooge’ of regional parties. The regional parties fatten up when they ally with a national party, while the national party loses strength and this is what has happened to us.

Even in the case of the BJP, it lost strength when it allied with BSP and regained only when it decided to walk alone.”

A senior leader, however, blamed the wrong decisions of a “coterie of leaders” who “mislead” the party leadership for vested interests.

“These leaders insist on an alliance so that they can make gains — financial and otherwise. The problem with the leadership is that it rarely interacts with workers at the grassroot level and relies on a coterie, which has spoilt the party’s game plan in 2016 after the party nearly resurrected in UP with ‘27 saal, UP behaal’ campaign,” the leader said.

The Congress workers are in no mood to start working for the forthcoming 2019 Lok Sabha elections.

“We don’t know whether the party will opt for an alliance or contest alone? If there is an alliance, we will get a small number of seats, because some of our leaders work for other parties even though they are Congress members,” said a party leader, urging steps to revive the confidence of workers in the field.