The IAF is on high alert since India carried out airstrikes at JeM’s Balakot terror camp in Pakistan on February 26. 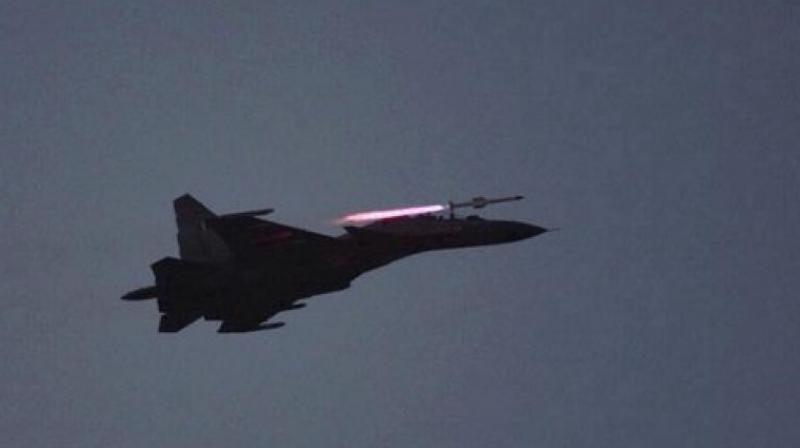 There have been a series of incidents of Pakistani drones coming close to the Indo-Pak border in various areas in the last four weeks following the Balakot air strikes.

This resulted in Pakistan also scrambling two of its F-16 fighter aircrafts close to the border. Soon after Sukhoi-30 were scrambled, Pakistani UAV retreated back to its base.

However, no side violated the air space, with the fighter jets of both countries staying within their own boundaries.

The IAF is on high alert since India carried out airstrikes at JeM’s Balakot terror camp in Pakistan on February 26.

The Pakistan Air Force (PAF) retaliated the next day, on February 27, by attempting to target Indian military installations. However, the IAF thwarted their plans and brought down an F-16.

There have been a series of incidents of Pakistani drones coming close to the Indo-Pak border in various areas in the last four weeks following the Balakot air strikes.

Last month, a UAV which intruded into Rajasthan’s Ganganag-ar was shot down by the Army. Also last month, a Sukhoi-30 fighter jet of the IAF shot down a Pakistani military drone in Bikaner sector of the Indo-Pak border using an air-to-air missile.

On February 27, India had lost only one MiG-21 aircraft. flown by Wing Commander Abhin-andan Varthaman had shot down one of the Pakistani F-16 aircraft which had intruded into Indian airspace. During the dogfight, his MiG-21 was hit and he had to eject into Pakistan-occupied Kashmir where he was arrested by Pakistan Army. Later on Wg cdr  Varthaman was released by Pakistan.

Meanwhile, Pakistan on Monday for the first time indicated that it used F-16s on February 27. Pakistan is under pressure as it could face action from the US for using F-16s against India as these jets were given to it only for self-defence and not to attack any other country.

India has got wreckage of AMRAAM missile which Pakistan can only use in F-16s to  proved that PAF used the US-supplied aircraft in the February 27.

Pakistan again claimed on Monday that it had shot down two Indian aircraft on February 27 and denied that its F-16 aircraft was brought down by Indian MiG-21.

“As regard Pakistan Air Force action for strikes across LoC it was done by JF-17 from within Pakistan airspace. Later when two Indian jets crossed LoC they were shot down by the PAF. Whether it was F-16 or JF-17 which shot down two Indian aircraft is immaterial,” said Pakistan’s military spokesman Maj. Gen. Asif Ghafoor in a statement. He said that even if F-16 have been used as at that point in time complete PAF was airborne including the F-16s, “The fact remains that Pakistan Air Force shot down two Indian jets in self-defence.”