Total number of corona positive rises to five in Assam, all have history of Nizamuddin congregation visit 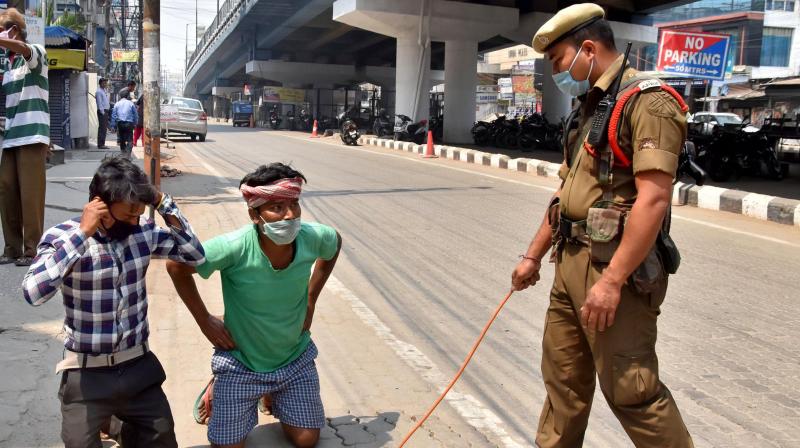 A security person punishes two youths for flouting the lockdown rules, imposed in the wake of coronavirus pandemic, in Guwahati. PTI photo

Fearing that some more cases would be detected by evening, the minister said, “All five cases detected in the state have the history of attending the religious congregation of Tablighi Jamaat at Nizamuddin in Delhi. The initial screening of nearly 195 samples collected last night has indication that some more positive cases would be detected by this evening.”

Pointing out that they were fearing that people who came back about 14 days back from Bangalore, Chennai and Kerala would be the most vulnerable to corona infection, the minister said that even after completion of quarantine period for them, no such cases have come to light as yet.

Informing that five corona positive people are---Jamal Uddin (52) of Karimganj, Md Arshad Ali (19) from Nalbari, Md Hazarat Ali (60) from Jagiroad , Md Nuruddin Ali (55)  and Jonab Ali (46) both from Jagroad, the minister said, “We are publishing the names deliberately as 117 people who went for religious congregation to Nizammuddin are still traceless. “We want to let the people know if they have come in contact with these people in your respective areas, they should approach us on helpline number 104 for check-up,” said the minister adding that four other confirm corona positive cases from Assam are admitted in a hospital in New Delhi.

Mr Sarma said, “Those admitted in Delhi are Naskar Ali (72) , Baharuddin (48) Mustafa Ahmed (59) and Md Ali ( 52) from Baksha. We are circulating these names to encourage others who came in contact with these people to take medical help at the earliest.” He feared that the positive cases in the state may increase further and cross to double-digits by evening.

He also informed that in addition to the first patient at Silchar Medical College and Hospital, four people who tested positive for Coronavirus today are admitted at Gauhati Medical College and Hospital (GMCH). “The health condition of all the patient is very well except the Silchar patient who is suffering from multiple disorders, said the minister while stating that Centre had provided with a list of 547 people to Assam government on Tuesday. Out 547, 134 were in the Nizamuddin area but not in Tablighi Jamaat.

He added that 68 people had stayed back in Delhi and 4 of them tested positive in the National Capital itself.  "347 are back in Assam and but did not get themselves quarantined. Out of 347, 230 of them have been traced overnight and samples are being collected." said the health minister.

Mr Sarma said that it was the responsibility of the society to identify and report the whereabouts of 117 people evading their location and hiding somewhere in the state. “We have asked out health personnel in village areas to trace the whereabouts of these missing people,” said Mr Sarma said that they have the stock of nearly 9000 personnel protection equipment besides the stock of 80,000 N-95 masks.

Admitting that their biggest worry is 117 people who came in contact with corona positive people at Nizamuddin religious congregation and hiding in the state, the minister however asserted that moral of doctors and paramedical staffs was very high and they are prepared to deal with any situation.

Meanwhile, veteran Muslim leader and president of All India United Democratic Front (AIUDF) Badruddin Ajmal on Wednesday appealed to all the community people who visited Nizamuddin to cooperate with health officials and get themselves checked their health condition voluntarily.