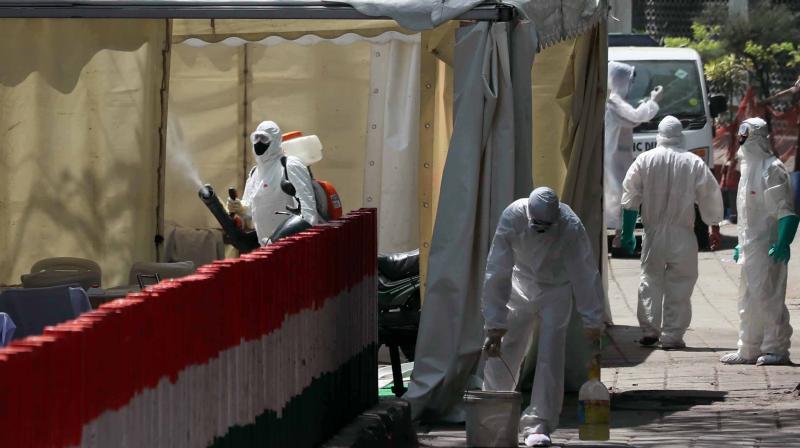 Health workers sanitizing an area near the Nizamuddin mosque in New Delhi on Wednesday, April 1, 2020 after people who attended a religious congregation organised by the Tablighi Jamaat tested positive for the corona virus. (DC Photo: Pritam Bandyopadhyay)

Tabligh-e-Jamaat's three-day congregation, in which people from across the country and various countries had gathered, has emerged as a "super spreader" of the novel coronavirus infection in the country.

The operation by Delhi government, medical staff, Delhi police and DTC staff
continued for 36 hours and the Markaz was cleared at 4 am on Wednesday. "The
entire building has been cleared and 617 people, who had symptoms, have been
hospitalised while the rest have been home quarantined," Sisodia announced on
Twitter.

"Medical staff, administration, police and DTC staff worked together in this 36-hour operation, putting their lives at risk. Hats off to all of them," he said in another tweet.

Soon after the evacuation, the Nizamuddin Markaz and the area around it was
sanitised by the South Delhi Municipal Corporation. With 32 new positive cases of coronavirus on Wednesday, the total number in Delhi has climbed to 152. Of these, 53 cases are linked to the Nizamuddin Markaz.

An FIR has been registered against the Alami Markaz cleric Maulana Saad, and six others, though he has been untraceable since March 28 after he was served a notice by the Delhi police.

Sisodia said that a list has been prepared with the phone numbers and other
details of people who attended the congregation and handed over to the Delhi
Police's cyber cell. They will trace the history of movement of these people with the help of their mobiles phones details and figure out how many people have come in their contact, and their whereabouts.

Sisodia appealed to those who attended the congregation or visited Alami Markaz in March to contact the administration and go to the local medical facilities immediately for a proper medical checkup.