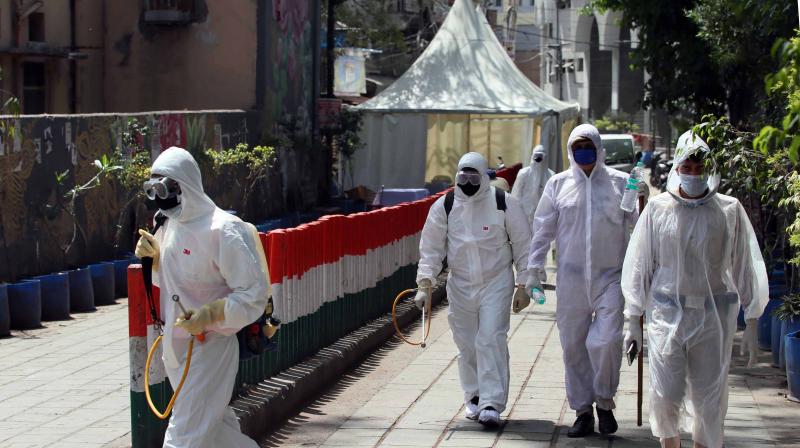 Health workers sanitizing an area near the Nizamuddin mosque after people who attended a religious congregation organised by the Tablighi-e-Jamaat in New Delhi on Wednesday, April 1,2020. (DC Photo: Pritam Bandyopadhyay)

New Delhi: Religious gatherings in the pre-lockdown days are posing a daunting challenge to India which on Wednesday recorded a steep rise in fresh cases of the novel coronavirus Covid-19.

According to the Health Ministry, 386 fresh cases were reported between 4 pm on Tuesday and 4 pm on Wednesday, taking the total number of positive cases in India to 1,637. There have been 39 deaths.

The accelerating numbers at this stage of the epidemic are consistent with the pattern seen in several countries that have had a coronavirus outbursts, such as Italy, Spain and the United. It would indicate that the epidemic is entering into a stage in which new cases are those contracted the contagion locally rather than abroad.

The government maintains that the virus is still not at the community transmission level and attributed the sharp rise to vector that formed at the Tablighi-e-Jamaat gathering in Delhi’s Nizamuddin area during March 10-13.

“One of the main reasons for the current rise in positive cases is the transmission by those who attended the Tablighi Jamaat meeting,” said Lav Agarwal, a joint secretary in the Health Ministry.

Ever since the death in Telangana of six participants in that convention in Old Delhi, states have scrambled to locate others in their territory and bring them to quarantine.

The Tablighi development within the Covid-19 narrative has lent a communal tinge to the issue, though it’s not the first, or likely the last, religious event that is linked to the spread of the virus.

All religious gatherings are now under the scanner, and more such cases are expected to come up in the coming days. In fact, a major crisis situation is building up in Punjab where a former 'Hazoori Raagi' of the Golden Temple, Nirmal Singh, has tested positive for Covid-19.

The 62-year-old Gurbani exponent recently returned from abroad and was admitted to Guru Nanak Dev Hospital in Amritsar after he complained of breathlessness and dizziness on March 30. Police have sealed the area around his residence.

According to officials, Nirmal Singh held a large sammelan in Delhi and some other places after he returned from abroad.

Punjab had registered its first case, that of 70-year-old religious preacher Baldev Singh, who had travelled to Italy and Germany before reaching Navashahr. He later died of Covid-19, the first death in the state. Baldev Singh had actively participated in religious gatherings — Hola Mohalla — in Anandpur Sahib between March 7-9 and, as of Monday, of the 38 confirmed cases in Punjab, 26 are either his family members or those who came in contact with him.

While religious gatherings are now posing a challenge in contact tracing, questions are also being raised on the efficiency of airport screening that missed people who are now testing positive.

Maharashtra, meanwhile, has become another hot spot for coronavirus as the number of cases reached 302 after 86 new cases were reported on Wednesday. In a major concern for health authorities, one positive case of Covid-19 was reported from Mumbai’s Dharavi, one of the world’s biggest slum areas. The patient, a 56-year-old man, passed away late on Wednesday from Covid-19 related issues. Seven of his family members have been put in quarantine while his contact history is being traced.