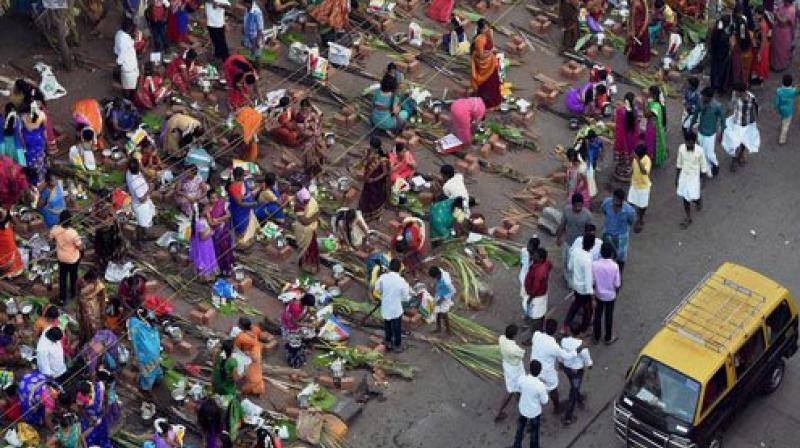 Mumbai: The death of a COVID-19 patient from Mumbai's Dharavi, known as one of the biggest slums in Asia, has exposed its residents to the vulnerability of contracting the viral infection and sparked a fear of its spread in the highly congested area.

Several small scale industries and workshops of leather goods, pottery and textiles operate from the slum colony spread over 613 acres.

A whopping 15 lakh people live in small shanties dotting the narrow bylanes of Dharavi, making it one of the most congested areas of the city.

Therefore, after the death of the man, the authorities are taking no chance and they have sealed the slum rehabilitation authority (SRV) building in which he lived.

The area has been demarcated as a 'containment zone', a civic official said.

The building in which the man lived is surrounded by slums on all sides. The deceased, who had a garment shop in Dharavi, developed symptoms like cough, cold and fever on March 23 and was admitted to hospital on March 26.

After the man died at the nearby government-run Sion Hospital, some 300 tenements in the building and around 90 shops were cordoned off by police.

Residents of the building were quarantined at home.

A civic official said they have also planned periodic spraying of disinfectants in the area, while the police have restricted people's movement there.

"All high risk contacts of the deceased have been stamped and quarantined. The swab samples of his family members and some building residents have been sent for testing," he said, adding that all senior citizens and people with respiratory illness in the building will also undergo tests.

No one will be allowed to go out of the building till the time test results of high risk contacts come out, he said.

"The Brihanmumbai Municipal Corporation (BMC) is going to provide food and ration to residents of the building," the official said.

The BMC has demarcated around 146 such containment zones in the metropolis where they have either found one or more COVID-19 patients or suspects, to contain the spread of the pandemic, he said.

In a 'containment zone', police limit people's access by barricading the area.