Domicile law amended as Kashmir struggles to cope with Covid-19 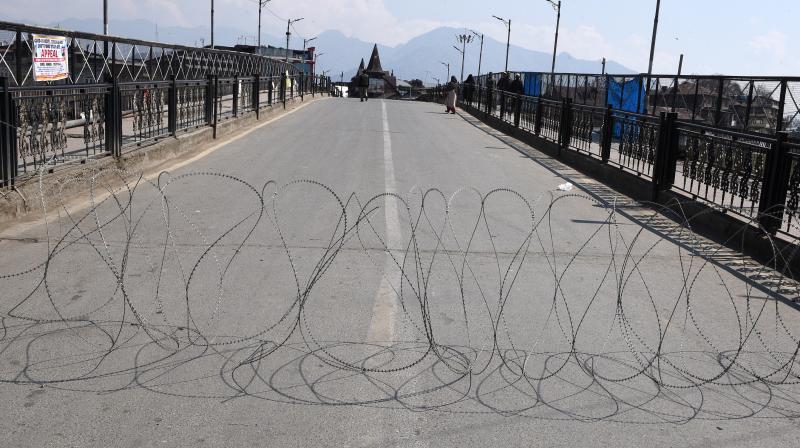 Srinagar looks like a ghost town due to the Covid-19 lockdown. The central government amended the Jammu & Kashmir's domicile laws, a move that has been criticised by all political civil society groups in the Kashmir Valley. (DC Photo: H U Naqash)

Srinagar: Political parties and trade and civil society groups in Jammu & Kashmir have expressed shock and dismay as the Centre came up with a new domicile law for the union territory (UT) at a time when like rest of the country is struggling to contain the Covid-19 scourge.

The new law notified by the Central government through a gazetted notification on Tuesday and circulated on Wednesday states that any person who has resided in J&K for a period of 15 years or has studied for seven years and appeared in secondary and higher secondary board examination would be considered as domicile of the UT and appointed in the services.

There is rage over it among the common residents, particularly the youth, many of whom took to social media platforms to pour scorn on the government and allege that the new law is aimed at paving the way for a demographic change in Muslim-majority J&K.

A furious Srinagar resident Ghulam Hassan Zarkob said, “This is a completely wicked move by the Indian government. People have been caught in a very difficult and perilous situation because of the Covid-19 threat. In fact, they have been reduced into frightened pigeons.”

He added, “Most of the people are confined to their homes. Many others are in hospital or in quarantine. The government of India has by taking advantage of this situation only proved itself to be the worst opportunist.”

Former chief minister and National Conference (NC) vice-president Omar Abdullah came down heavily on the Centre for issuing such a notification at a time when everyone’s attention should have been on Covid-19 control.

He tweeted, “Talk about suspect timing. At a time when all our efforts & attention should be focused on the #Covid outbreak the government slips in a new domicile law for J&K. Insult is heaped on injury when we see the law offers none of the protections that had been promised.”

Without naming Syed Altaf Bukhari, former minister and president of the newly formed Jammu Kashmir Apni Party, Abdullah also said, “You can imagine how hollow the domicile law is from the fact that even the new party created with Delhi’s blessings, whose leaders were lobbying in Delhi for this law, have been forced to criticise the #JKdomicilelaw".

Bukhari earlier demanded that the new domicile law be put in abeyance till the Covid-19 pandemic is over. “It is most unfortunate that such an important order has been issued at a time when the whole country is battling for its survival and is under strict lockdown,” he said.

He added that while his party had been vehemently demanding domicile rights on land and jobs for the residents of J&K, the order issued by the Centre “reflects a casual exercise carried out at bureaucratic level without taking aspirations and expectations of people into consideration.”

The People’s Democratic Party (PDP) termed the move as “frighteningly ambivalent, irresolute and akin to rubbing salt to the people’s wounds”. While the PDP president Mehbooba Mufti remains in incarceration, her party general secretary Surinder Choudhary in a statement said that the notification is “ill-timed, very badly drafted and outcome of confused and chaotic bureaucracy”.

He added, “It seems that the order has been deliberately issued at a time when the entire country as well as J&K is facing a dreadful threat due to the outbreak of the deadly virus and the whole population is caged in their homes”.  He alleged that either those at the helm are trying to play a proverbial ostrich or deliberately trying to insult the people by issuing an order which contains “ruthlessly confusing content which is but akin to rubbing salt to their wounds.”

CPIM’s Mohammad Yousuf Tarigami termed the new domicile law as another hoax by the BJP leadership with the people of J&K. “It has escalated fears among the residents of J&K that they will not only lose jobs but also land to outsiders,” he said and alleged that 15 and 10 years cap, as has been put in 3A of the new domicile law, is primarily meant for children of security forces personnel and other Central government employees. “It means after five years they may need to settle them here,” he said.

People’s Conference headed by former BJP’s ally Sajad Gani Lone, Congress and several other political parties too have criticised the Centre over issuing such a “faulty, unfair, humiliating and insulting” order and demanded its immediate rollback. Srinagar’s mayor Junaid Azim Muttu tweeted, “The lowest rung in jobs has been reserved for locals, not even non-gazetted but Class IV jobs. There seems to be a clear intent of conveying yet another serving of humiliation and insult to the people of J&K after what transpired on August 5 (2019)”

However, BJP’s Ashwani Kumar Chrungoo welcomed the new domicile law but, at the same time, demanded that the issue of fresh registration of migrants with the Relief & Rehabilitation office should be immediately stopped. “This issue was raised with the appropriate authorities earlier as well, but the exigencies of situation so warranted that the registration should come to a close formally and officially now," he said in a statement in Jammu.

He alleged that there are a number of elements who always try to exploit the legal and formal procedure to the benefits of the vested interests and said, “The continuation of registration of ‘migrants’ has since lost its relevance and the system needs to be abolished forthwith. This will also protect the interests of the already registered migrants and their progeny in both Kashmir Valley and Jammu.”