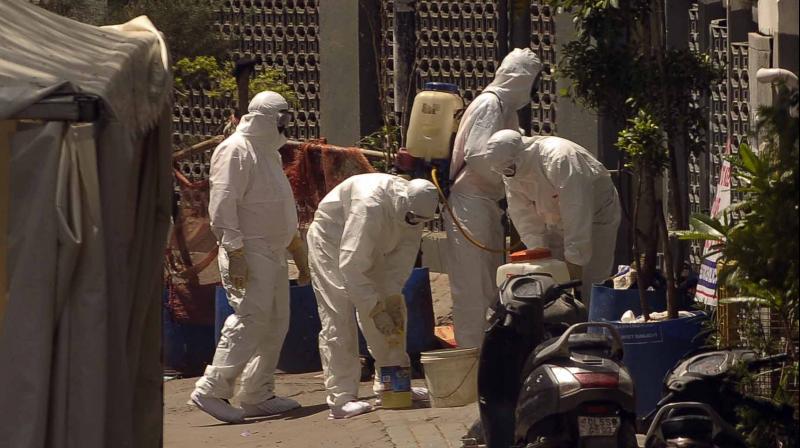 Health workers sanitizing an area near the Nizamuddin mosque after Covid-19 positive people who attended a religious congregation organised by the Tablighi Jamaat spread the deadly virus to different parts of the country. (DC Photo: Pritam Bandyopadhyay)

New Delhi: The Union government has decided to proceed against the foreigners who attended a religious gathering organized by the Tablighi Jamaat at Nizamuddin in Old Delhi, from where carriers of the coronavirus transmitted the deadly infection to different parts of the country.

The news agency PTI reported that Union home minister Amit Shah has directed the Delhi police, the police chiefs of states to take legal action under the Foreigners Act and the Disaster Management Act against 960 foreigners for violating laws of assembly.

These 960 foreigners have been blacklisted and their visas have been cancelled, the Home Ministry said in tweet.

In another  significant development, sources in the Enforcement Directorate (ED) indicated to Deccan Chronicle that a money-laundering probe is being contemplated against the Tablighi Jamaat and its chief Maulana Saad to trace the source of their funds.

According to these sources, ED personnel are in touch in this regard with the Delhi police, who have registered a first information report (FIR) against the maulana and other members of Tablighi Jamaat under the Epidemic Disease Act, 1897 and relevant sections of the Indian Penal Code (IPC) for violating government directions prohibiting public gatherings.

Bands of missionaries, several of them foreign, fanned out from the congregation to various parts of the country unwittingly carrying the deadly virus with them. Covid-19 positive cases and deaths due to the infection have been reported from Hyderabad, Tumakuru, Tamil Nadu, and other places.

The Enorcement Directorate is scrutinizing the details of the 960 foreign nationals who attended the gathering.

The ED is looking at launching a probe against the Jamaat under the stringent provisions of the Prevention of Money Laundering Act (PMLA), sources said.

Prior to the Nizamuddin congregation, the Tablighi Jamaat had organised similar religious gatherings at the Sri Petaling Mosque in Kuala Lumpur, Malaysia, which has been linked to more than 600 COVID-19 cases, making it the largest-known centre of transmission of the virus in southeast Asia.