About 2000 contacts of Covid-19 positive persons have been identified 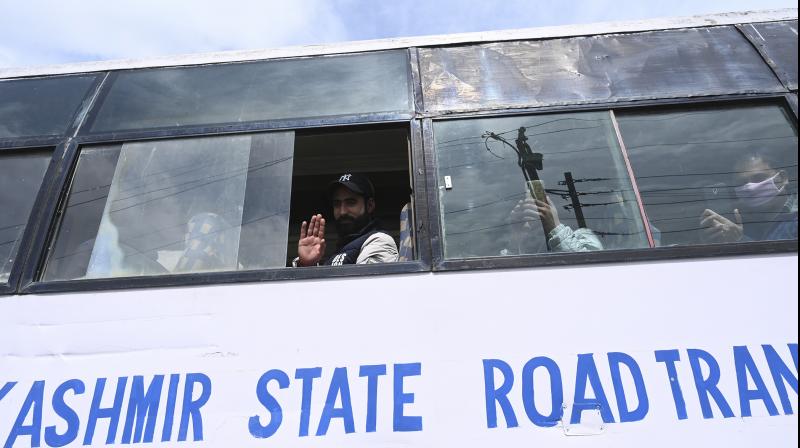 A man waves from inside a bus after he is discharged from a makeshift coronavirus quarantine facility set up at a hotel requisitioned for the purpose by the authorities in Srinagar, Jammu & Kashmir. Hundreds of local residents who were on their return from outside Kashmir were quarantined in such facilities. The authorities say that most of the 49 persons tested positive a have history of travel to various parts of India and abroad. (DC Photo: H U Naqash)

Srinagar: The Jammu & Kashmir police on Wednesday stepped up their efforts to trace members of the Tablighi Jamaat who are reported to have attended a meeting at its headquarters in New Delhi’s Nizamuddin area in mid-March but have not, so far, presented themselves for mandatory screening and possible quarantine, officials here said.

A large number of the participants of this meeting are reported to have contracted the novel coronavirus that causes the disease COVID-19 and several others including one from J&K have died of the disease over the past one week.

Reports emanating from the capital said that 87 people from J&K who were among the people stuck in the Nizamuddin area have been put in quarantine in Delhi itself.

J&K’s director-general of police Dilbag Singh said on Wednesday evening in Kathua that most of those from the union territory who attended the Tablighi Jamaat congregation at Nizamuddin have been traced and will soon be sent to quarantine.

He, however, did not disclose the number of such people.

With six more persons testing positive, the number of COVID-19 patients in J&K rose to 62 on Wednesday. Officials said nearly 2000 contacts of these positive cases have been identified and efforts are being made to put them in hospital quarantine.

While addressing a press conference in Jammu, the chief spokesman of J&K government Rohit Kansal said  “a robust tracing process” was underway. Many of the positive cases could be traced as a result of a vigorous contact tracing exercise undertaken by the administration.

“As a result we were able to trace many cases including some that were asymptomatic. This is important because if not traced these cases could have continued in the general population and could even have infected more cases.”

Kansal said that nearly 2,000 contacts of positive cases have already been identified and instructions have been issued that no known contact be left untraced. He claimed that J&K has been testing cases aggressively and it was among the first to start testing locally through four testing centres.

“Our testing rate has been nearly 77.5 per million, one of the highest in the country and next only to Kerala. We have decided to further increase it. To begin with, we plan to test every single one of the 2,000 contacts that we have identified,” he said.

The authorities said that 236 more persons who were shifted into administrative quarantine upon their return to Srinagar two weeks ago were on Wednesday discharged after successfully completing their 14-day quarantine period. Most of these persons were students who had returned from Bangladesh and other countries.

The officials said that about 1,900 such persons were put under administrative quarantine in Srinagar. Another group of about 370 among them will be sent home on Thursday after completion of their quarantine.