India   All India  02 Apr 2022  Ready to supply to India any goods it wants to buy: Lavrov
India, All India

Ready to supply to India any goods it wants to buy: Lavrov 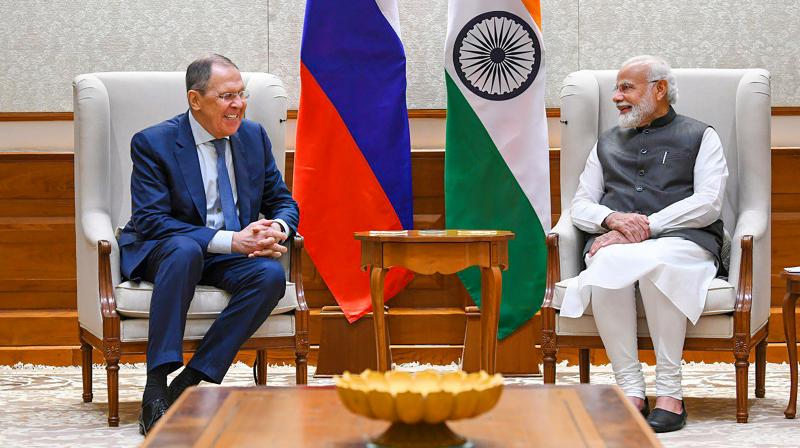 Prime Minister Narendra Modi on Friday evening told visiting Russian foreign minister Sergey Lavrov that there should be swift “cessation of violence” in Ukraine and conveyed “India's readiness to contribute in any way to the peace efforts”.

With India buying Russian oil at highly discounted prices and the Russians apparently willing to offer more, Mr Lavrov had, after talks with external affairs minister (EAM) S. Jaishankar, earlier declared his country would be ready to supply any goods that India wanted to buy from it, adding that the Rupee-Rouble mechanism is a way to bypass trade in dollars and the Western sanctions imposed on Russia.

Discussing the Ukraine crisis and its economic impact on trade ties, EAM Jaishankar told his Russian counterpart that “as a developing economy, global volatility in different domains is of particular concern to India” and that “it is important for both countries that their economic, technological and people to people contacts remain stable and predictable”.
India has close defence ties with Russia spanning decades and these were also discussed on Friday. Interestingly, Mr Lavrov hailed Russia, India and China as three “natural partners” that have a common approach to resolve problems. The Russian foreign minister wrapped up his scheduled two-day visit to Delhi in the evening after calling on PM Modi.

Asked whether Indian mediation was possible to solve the Ukraine crisis, Mr Lavrov at a select media briefing organised by the Russian side in the afternoon also indicated in a somewhat cautious answer that Russia was seeking certain security guarantees from Ukraine and that the West had ignored its responsibilities, adding that if India wanted to support the peace initiatives, Russia was “not against” this. The Russian foreign minister said, “India is an important country. If India sees to play that role which provides resolution of the problem...If India is with its position of a just and rational approach to international problems, it can support such process.” Mr Lavrov also said there was “no approved plan” as yet to resolve the Ukraine crisis.

The Russian minister also praised India's foreign policy as “independent” and “not bowing to US diktats”. He appreciated that India was looking at the Ukraine crisis in its “entirety of facts” and “not in a one-sided way”, adding that both countries always “respect and accommodate each others’ interest”.

India has not voted against Russia at the UN on the Ukraine crisis and has also not condemned Moscow for its military offensive in Ukraine.

During the talks on Friday, EAM Jaishankar also sought to convey New Delhi’s consistent stand to Moscow that violence and hostilities ought to end immediately, with New Delhi conveying a veiled disapproval by saying that “differences and disputes should be resolved through dialogue and diplomacy and by respect for international law, UN Charter, sovereignty and territorial integrity of states”. In his media remarks at the start of talks, the EAM said, “Our meeting today takes place in a difficult international environment quite apart from the pandemic. India, as you are aware, has always been in favour of resolving differences and disputes through dialogue and diplomacy.”

In his remarks at the start of talks, Mr Lavrov recalled that bilateral ties and the “privileged strategic partnership” between both nations had sustained “through many difficult times in the past”. Mr. Lavrov said, “We respect basic Indian principles based on legitimate national interests”. Speaking later at the select media briefing, Mr Lavrov said that for gas supplies from Russia to Europe, an “honest scheme” has been found for payment in roubles since the West had “promoted discrimination” by freezing Russian accounts in Euros and Dollars. Mr Lavrov blasted the West for “forcing others to join their politics” and accused the US of acting recklessly in nations such as Libya and Syria.