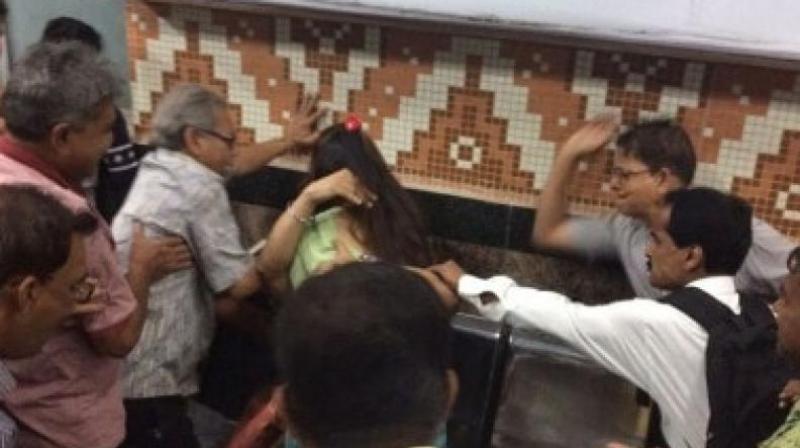 A couple was harassed, abused, and thrashed by a group of elderly men in Kolkata Metro on Sunday evening. (Facebook Screengrab)

Kolkata: After a young couple was harassed, abused, and thrashed by a group of elderly men in a metro train compartment for allegedly 'standing too close' and hugging each other, Kolkata Metro issued a statement on its Facebook page saying it was against moral policing. However, there seems to be a bit of discord amongst Kolkata Metro and those handling its social media accounts.

Soon after putting up the "Against Moral Policing" post, the person handling the metro's verified social media page wanted to express their personal opinion, which, quite clearly, is not what the Kolkata Metro apparently endorses. Forgetting to switch to their personal account, the administrator commented views which were in sharp contrast to the official status.

"The incident was a result of year-long vulgarity shown by a section of the younger generation… such incidents would continue to happen until the younger generation got themselves 'rectified'." Already up in arms against the inaction by the metro officials, social media users were flooding the page with comments and this ‘official one’ did not go unnoticed. While it has now been deleted, screenshots of the same are circulating widely.

Here’s the full text of the comment, which has now been deleted: 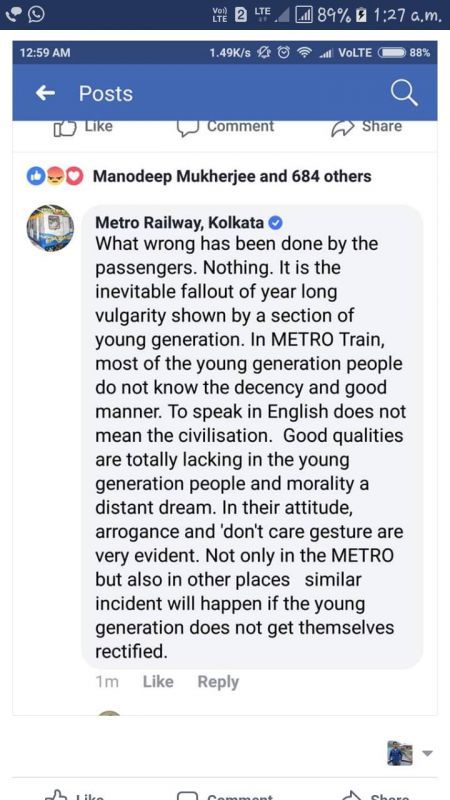 On Wednesday, youngsters offered 'free hugs' to people outside Dum Dum Metro station in north kolkata as a mark of protest against people who had allegedly beaten up a couple for hugging in the metro. Protesters say, 'Hugging is not something visually perverted, it's a sign of affection'.

Youngsters offer 'free hugs' to people outside Dum Dum metro station in kolkata', as a mark of protest against people who had reportedly beaten up a couple for hugging in the metro. Protesters say,'Hugging is not something visually perverted, it's a sign of affection' #WestBengal pic.twitter.com/Hr3UwVXfpY

Condemning the incident, people, carrying placards, congregated outside outside Dum Dum metro station on Tuesday, demanding a suo motu case by the Railway Police Force (RPF) against the assaulters.

Spokesperson of Kolkata Metro Rail, Indrani Banerjee said appropriate action would be taken in the matter if the victim came forward with a complaints.

She added that the Metro Rail does not support moral policing of any kind.

" We have asked the station master, the RPF personnel on duty (about the incident), but none of them could confirm what happened. There is also no official complaint by any passenger. We are eager to conduct an inquiry if we get a lead." Indrani Banerjee said.

According to reports, a journalist, who witnessed the incident, said the train was crowded and the couple, in their mid-twenties, was standing near the seats reserved for senior citizens. The journalist said that the young man tried to guard the woman from others by keeping his hands on her shoulder, which an elderly man found offensive, sparking off a row, which reportedly got uglier.

Meanwhile, no complaint has been registered yet, police said. Metro officials too said that they have not received any complaint in this connection.