India   All India  02 May 2018  Katihar SP celebrates transfer to CBI by firing 10 rounds at farewell party
India, All India

In the video, Jain and Mishra can be seen enjoying the farewell party when Jain starts firing bullets to match with the beats of the song. 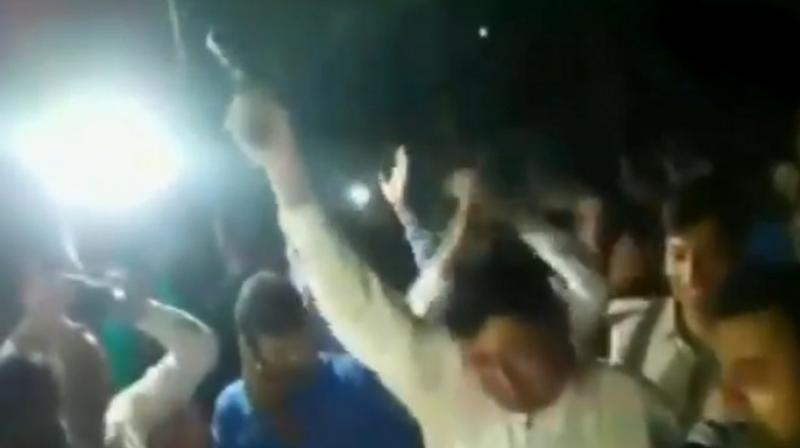 The incident which took place on Tuesday evening was also attended by senior officers of the district. (Photo: ANI/Twitter)

Katihar: In a farewell celebration at the Railway Golf Grounds in Bihar's Katihar, a Superintendent of Police (SP) has been captured on camera firing 10 rounds of bullets in the air.

The farewell party was being held to celebrate Katihar SP Siddharth Mohan Jain's transfer to the CBI in Delhi as well as District Magistrate Mithilesh Mishra's transfer.

The incident which took place on Tuesday evening was also attended by senior officers of the district.

In the video that surfaced, Jain and Mishra can be seen enjoying the farewell party and Mishra is singing a song from the 1975 hit Sholay film - 'Ye Dosti Hum Nahi Todenge'.

During this, Jain started firing bullets to match with the beats of the song. Jain kept on firing till the magazine of the pistol was completely empty. No case has been registered against the police officer for misuse of his official weapon.

However, Additional Director General of Police SK Singhal said, "This is unacceptable.We will investigate the matter and take strict action against him. His central posting has also been stayed till then."

According to an NDTV report, no one was injured but the display of unruly, irresponsible behaviour by a top police officer was shocking to those who have watched the video.

Celebratory firing in the air, a tradition which is still widely practised in parts of northern India, has often turned fatal when people are accidentally hit by stray bullets.