India   All India  02 May 2018  Trouble brews in Aligarh Muslim University over Jinnah's photograph
India, All India 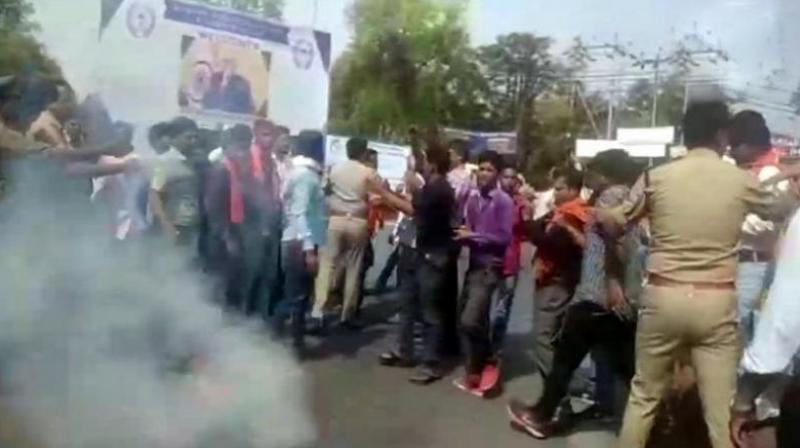 Rapid Action Force (RAF) of the Uttar Pradesh police had been deployed at the university after students clashed with men belonging to right wing organisation who had been demanding the removal of Jinnah’s photo. (Photo: ANI | Twitter)

Lucknow: Aligarh Muslim University, for decades, has seen a photograph of Pakistan founder Muhammad Ali Jinnah adorning one of its walls. However, a controversy has broken out over the demand for the removal of the photo. Following the demand, at least three students were injured in a police lathicharge on Wednesday for protesting it.

Earlier on Wednesday, Rapid Action Force (RAF) of the Uttar Pradesh police had been deployed at the university after students clashed with men belonging to right wing organisation who had been demanding the removal of Jinnah’s photo.

Hundreds of students tried marching to the local police station where the men had been confined. However, RAF used force to disperse the crowd, reports said.

The clash took place at the university’s main gate.

The photo of Muhammad Ali Jinnah has been hanging at the University's student union hall for decades.

On Monday, Satish Gautam, the BJP lawmaker from Aligarh, wrote to university vice-chancellor Tariq Mansoor, asking why the portrait was allowed.

He wrote, 'I have heard a portrait of Muhammad Ali Jinnah is hung inside the campus. Kindly gather more details on this and give reasons behind it.'

AMU spokesman Shafey Kidwai responded that Jinnah was a founder of the university and was granted life membership of the student union.

Speaking to news agency PTI, he said that traditionally, photographs of all life members are placed on the walls of the student union.

The spokesman further added, “Jinnah was accorded life membership of the AMUSU in 1938. He was the founder member of the University Court in 1920 and also a donor.”

Incidentally, the controversy coincided with a visit by former vice president Hamid Ansari, who was a professor and vice chancellor of the university.

Speaking about the incident District Magistrate CB Singh added, “The situation is peaceful, 2 RAF companies have been deployed in the area, there is no cause for worry.”

It is believed that university officials have temporarily taken down Jinnah’s photo, but there is no official word on it.

NDTV sources say many other portraits too have been taken down for the purpose of cleaning.