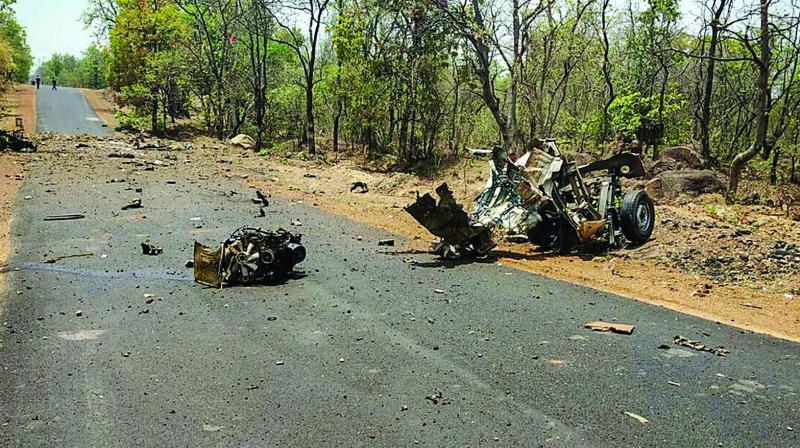 Mangled remains of a police vehicle carrying 16 security personnel that was allegedly bown up by Maoists using IED in Gadchiroli, Maharashtra, on Wednesday. (Photo: PTI)

Mumbai: Fifteen C-60 commandos, personnel of Quick Response Team, and a driver were killed by Maoists when they set off an improvised explosive device (IED) targeting two patrol vehicles in Gadchiroli, Maharashtra, on Wednesday.

Preliminary reports stated that the explosion was so powerful that the vehicles were flung into the air and were found in a mangled condition. The blast was carried out in protest against the gunning down of 40 Maoists in an operation on April 22 last year, the police claimed. Maoists had been observing a week-long protest in the region to mark the first anniversary of the incident.

The Naxal-infested neighbourhood had witnessed an attack in April when the district had gone to the polls.

Wednesday’s attack followed the burning of at least 35 vehicles in Kurkheda on Tuesday night while the administration was in the process of making arrangements for Maharashtra Day celebrations. The torched vehicles belonged to Amar Infrastructures Ltd, which is constructing the Purada-Yerkad sector on National Highway 136 near Dadapur village.

Those killed were members of the Quick Response Team (QRT) of Gadchiroli Police, which was on its way to inspect the torched vehicles, an official said.

The blast took place as the vehicle reached Samburkheda on Dadapur Road in Korchi taluka of Gadchiroli district, the official said.

Police teams are reaching the spot for evacuation operation, he said.

“The commandos were on patrol duty in two private vehicles and were headed to Purada village when they were targeted. The IED went off near an open drain killing the personnel, all of whom were attached with the Kurkheda police station,” said an officer of the Gadchiroli police.

Reinforcements were soon rushed to the spot and the injured policemen were shifted to Gadchiroli’s civil hospital.

Shailesh Balkawade, superintendent of police, Gadchiroli, said, “A group of Maoists gathered around 3.30 am at Dadapur where the construction of a national highway has been going on for the past few months. They torched vehicles that were parked on the road using kerosene and diesel after which they escaped into the forest.”

Banners condemning the killing of Maoists were also found in the affected areas, the police said. Last April, C-60 commandos had an encounter with Maoists at Kapewancha.