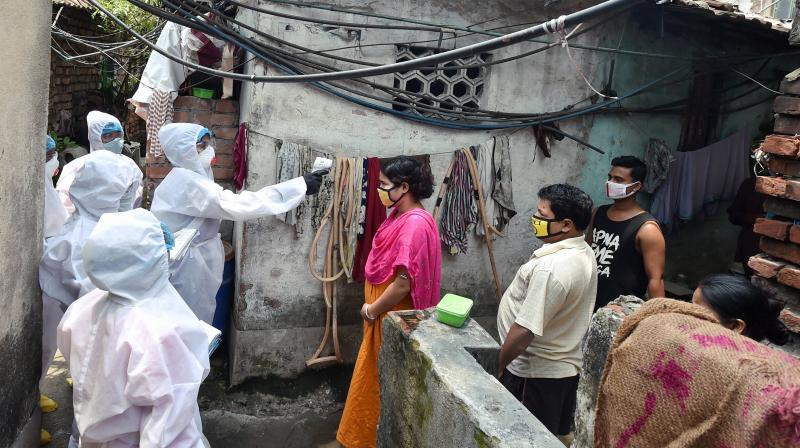 Durgamma had two daughters and had been living with one of them at Kothakota on the outskirts of Kurnool city for the past four months. PTI Photo

In an act of utter inhumanity, a 75-year-old woman died by the roadside when villagers of East Narasapuram village in Singanmala mandal, and in particular her own relatives, were too scared to touch her, suspecting her to be a Covid-19 patient.

The villagers suspected she had Covid-19 because she came from Kurnool which is a seriously affected area. Durgamma had two daughters and had been living with one of them at Kothakota on the outskirts of Kurnool city for the past four months.

The village ward staff found out that the old woman came from Kurnool district and alerted the medical officer of Singanmala mandal.

“Though she had a history of paralysis and hypertension she had no symptoms of covid virus, but her relatives stepped away from her and even failed to provide her food,” a member of the ward team said. It was the ward team that gave her food and medicines, he said.

Left with no support, she had another paralytic attack and died on the road on Friday. Local leader Srirami Reddy intervened and convinced the relatives and other villagers that Durgamma had died because of hyper tension and paralysis and had no symptoms of corona virus.

The villagers then cremated Durgamma and her relatives took part in the cremation.

Singanmala MLA, Jonnalagadda Padmavathi, appreciated the efforts of the ward sachivalayam office staff and medical teams to bring awareness among the villagers but it came too late to save the old woman from a cruel death.