India   All India  02 May 2021  12 critical Covid patients die at Batra Hospital in Delhi due to lack of oxygen
India, All India

Dr Himthani, head of gastroenterology department, was among those who died due to lack of oxygen, said Dr S.C.L. Gupta, hospital director 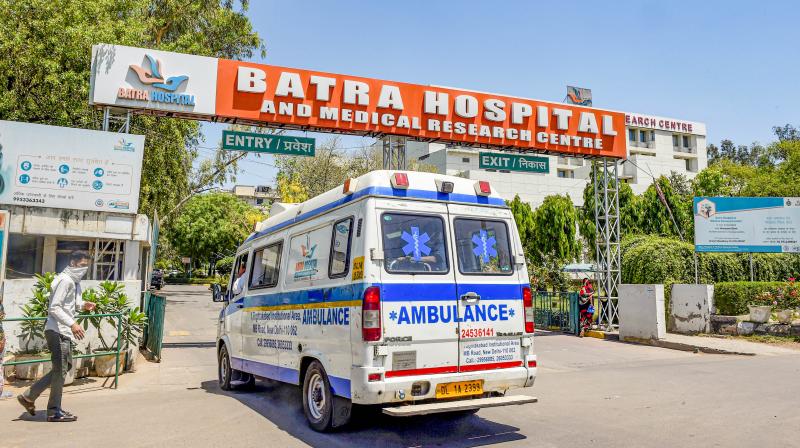 New Delhi: Twelve critical Covid-19 patients died at the Batra Hospital in Delhi's Mehrauli area allegedly due to oxygen shortage. Six of the 12 people who died had been admitted to the hospital's ICU (intensive care unit) and among the deceased is the hospital’s gastroenteritis head, Dr R.K. Himthani (62).

"We ran out of oxygen at 11.45 am. Supply came at 1.35 pm (a second tanker reached at around 4 pm). We were out of oxygen for 1 hour and 20 mins," the hospital told the Delhi high court which was holding the 11th day of hearings into a crisis triggered by a massive wave of Covid infections.

"We hope no lives were lost," the court responded, to which the hospital said: "We have... including one of our own... one doctor."

About 230 people were left without oxygen for 80 minutes.

Batra hospital has 327 patients out of which 48 are in the critical care unit. It has been raising alarms since Saturday afternoon over depleting levels of oxygen supply.

"Once a patient is pushed to the edge without the support of oxygen, it is very difficult to revive him. Unfortunately, we are expecting more fatalities," said Sudhanshu Bankata, executive director of the hospital.

Dr Himthani, head of the gastroenterology department, was among those who died due to lack of oxygen, said Dr S.C.L. Gupta, medical director of the hospital. He had been admitted to the hospital for the last 15-20 days.

The hospital had sent out an SOS message about oxygen shortage on Saturday.

Dr Gupta said they had informed the authorities about lack of oxygen Saturday morning when they had 2,500 litres of the life-saving gas left. The oxygen tanker arrived at 1.35 pm, they said, adding that they were without oxygen for 80 minutes. Saturday was the second time in the space of a week that the hospital ran out of oxygen.

Delhi chief minister Arvind Kejriwal expressed grief over the incident. "This news is very painful. Their lives could have been saved -- by giving them oxygen on time. Delhi should get its quota of oxygen. Can't see our people dying like this. Delhi needs 976 tonnes of oxygen, but it received only 312 tonnes yesterday. How will Delhi breathe in such a less amount of oxygen?" he said on Twitter in Hindi.

Fortis Hospital in Vasant Kunj has stopped taking admissions due to oxygen shortage. The hospital has four hours of oxygen left, sources said. According to the Delhi Corona mobile application, the hospital has 106 coronavirus patients.

Sehgal Neo hospital in Meera Bagh too sent out an SOS message on Twitter about its dwindling oxygen. "We request urgent assistance in getting #SOSoxygen. We are running out of our backup supply, and have been waiting for a supply since early morning. We have 90 patients on O2 & 13 in ICU," the hospital tweeted around 12.40 pm.

Hospitals across the national capital and its suburbs have been sending out desperate messages of help on social media and other platforms, flagging their dwindling stocks of oxygen.

Delhi has recorded between 24,000 and 28,000 new coronavirus cases per day over the past two weeks, and has also reported record numbers of Covid-related deaths per day. The city's quota of oxygen had been raised to 490 metric tonnes per day, but supply is only around 400 MT, the state government has said.
Sir Ganga Ram Hospital had last week reported the death of 25 of its “sickest” patients as the administration struggled with depleting oxygen supplies.

Deputy chief minister Manish Sisodia had on Friday said that not for a single day has Delhi been able to receive the allocated quantity of 490 MT of oxygen.