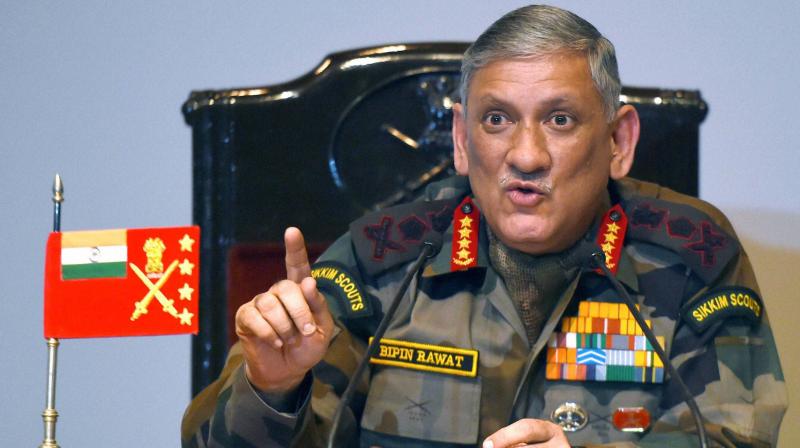 New Delhi: Amid intriguing speculation about the purpose behind Army Chief Gen. Bipin Rawat summoning his all seven commanders to a marathon meeting in Srinagar on Thursday, there are strong indications that the Army may undertake an all-out offensive against militants in Kashmir. The meeting took place at the Army’s 15 Corps headquarters in Srinagar’s Badami Bagh Cantonment.

“The commanders were called to Srinagar because it will be troops and officers at Ground Zero who will ultimately execute the plans by fanning out into the hinterland. Moreover, all commanders have served in Kashmir at some stage, so it makes logistical sense to hold the meet in Srinagar where it will be easier to meet military and other security officials manning key operational positions in case of a major operation,” reliable and informed sources told this newspaper on condition of anonymity.

Sources said that the meeting was earlier scheduled to be held in New Delhi but the venue was shifted to Srinagar in a display of reassurance to the nation that the Army and other security forces “are in complete control in the Valley and are committed to safeguarding the country’s sovereignty and integrity and also restoring and maintaining peace in Jammu and Kashmir.”

With all the commanders being present, it will also be easier “to have everyone on the same page” and coordinate plans for the movement of men and material in case of an operation that aims at concrete results.

With the onset of summer leading to snow-melt and opening of the mountain passes, attempts by militants to infiltrate into India from the Pakistani side have already picked up even as strong intelligence information of the militants and their networks exists.

“The idea is therefore to deactivate as many militants as possible, who are already present in the Valley, in the next few months before winter sets in and, meanwhile, thwart all infiltration attempts as we are in a dominant position on the Line of Control,” the sources said adding that Budgam, Kulgam, Traal, Pulwama and Shopian may be the focus area of the operation.

This was Gen. Rawat’s third visit to restive Jammu and Kashmir in the past one month and sixth after taking over as the Army Chief last year.

That the Army may be opting for a change in operational tactics was indicated by Gen. Rawat who recently said that the Army is fighting a “dirty war” in Kashmir and that innovative ways have to be taken recourse to while another top Army official had described the killing of 22-year-old Lieutenant Ummer Fayaz by militants on May 10 as a “watershed” moment in Kashmir Valley.

The immediate cause of the possible tactical shift change may have been due to two factors. Firstly, local boy Lieutenant Fayaz’s killing has generated considerable anger among the local people against militants. Secondly, the fact that quite a few Army operations in the recent past have suffered due to stone-pelting by civilians enabling the militants to flee in the ensuing melee.

A day after Lieutenant Fayaz’s bullet-riddled body was found, the Army, in a sign of “no-holds-barred” toughening of the rules of engagement, started operating in a “seeking and engagement” mode and brought back the Cordon and Search Operations (CASOs) abandoned in 2002. CASOs involve cordoning off an area, asking civilians and locals to step outside their homes while a hunt is carried out for militants and weapons.