BSF constable Godhraj Meena sustained 85 per cent disability after terrorists' bullets hit him during an attack in J&K in 2014. 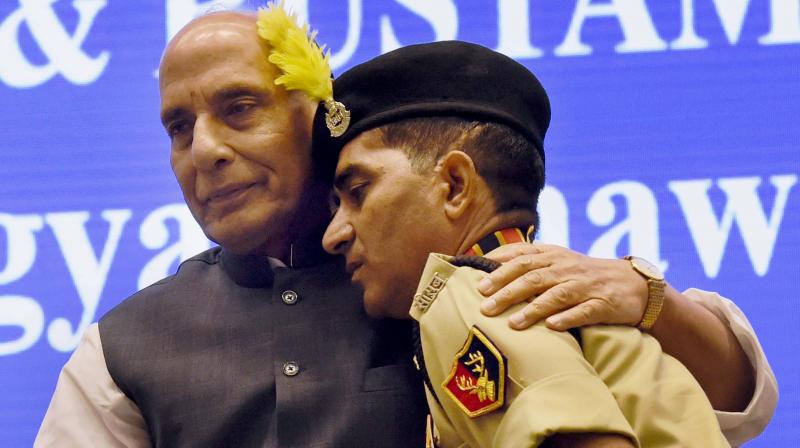 Union Home Minister Rajnath Singh after presenting Police Medal to constable Godhraj Meena, who took on militants when they attacked a BSF bus in Udhampur in J&K on August 5, 2015, at the 15th BSF investiture ceremony in New Delhi. (Photo: PTI)

New Delhi: In a rare gesture, Home Minister Rajnath Singh on Thursday broke protocol and hugged BSF constable Godhraj Meena who sustained 85 per cent disability after terrorists' bullets hit him during an attack in Jammu and Kashmir's Udhampur in 2014.

Meena's bus, part of a Border Security Force convoy, was ambushed by terrorists on August 5, 2014 near the 'narsu nalah' area in Udhampur with a heavy gunfire. The citation of the 44-year-old trooper said he was on guard duty in the bus and his bravery, acute presence of mind and accurate fire kept the two terrorists at bay and thwarted their attempts to enter and target the about 30 personnel onboard.

Meena, who is not able to speak properly as one bullet had pierced through his jaw, received a thunderous applause from the officials and jawans when the home minister pinned the gallantry medal on his chest.

Even before Mr Meena could accord the mandatory salute, the home minister hugged and patted him and saw him off from the dais with a firm and long hand shake.

BSF officials said as per protocol, the home minister, after pinning the medal and handing over the citation, has to shake hand with the awardee and the person moves ahead after according a salute to him.

"What we saw today is rare, very rare. This is only in very special cases like that of Meena who has suffered 85 per cent disability after the attack. He is not able to talk and walk properly but despite this he dons his uniform with pride," a senior officer said.

The officer said Meena has now been deputed for conducting administrative duties.

This retaliation had led a total of four BSF personnel, including Meena, being decorated with gallantry medals.

The others included constable Subhendu Roy, driver Daljit Singh and constable Rocky who was awarded the 'Shaurya Chakra'.

Later, during his speech, the Home Minister said he was proud of Meena's bravery and grit.

He also awarded the police medal for gallantry (posthumous) to the wife of the constable and cook of the BSF unit Sanjay Dhar.

Dhar was posted at the 'Pittal' border post along the Indo-Pak International Border in Jammu and laid down his life while saving his friend who had got injured in an unprovoked firing incident by Pakistan on July 16, 2014.

Singh, during the annual investiture ceremony of the BSF, also awarded gallantry medals to a total of seven troops of the border guarding force for their daredevil actions during ceasefire violations along the India-Pakistan border and while handling attacks by militants in Jammu and Kashmir.

He also decorated five personnel of the 41st battalion of the force for undertaking an anti-Naxal operation in Chhattisgarh's Kanker in 2014, where the team killed two Maoists.