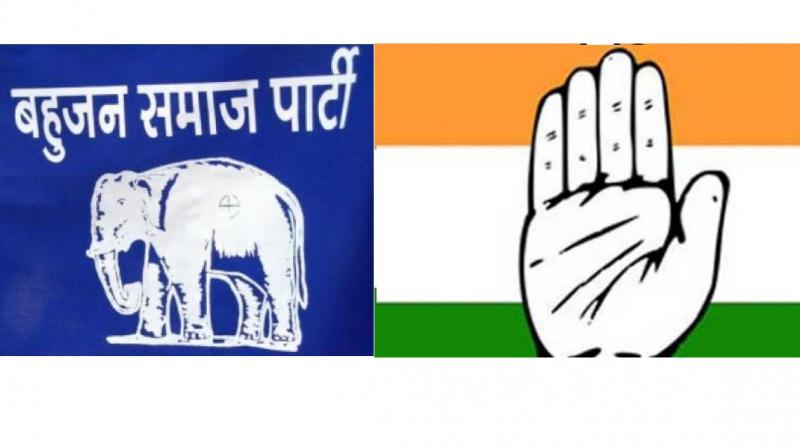 The Congress is likely to give as many as 30 seats to the BSP in MP as Congress state president Kamal Nath was finalising the deal with top BSP leaders.

New Delhi: After the successful experiment in Karnataka where it formed a pre-poll alliance with the Janata Dal (Secular), the Bahujan Samaj Party is now aligning with the Congress in three crucial upcoming Assembly polls in Madhya Pradesh, Chattisgarh and Rajasthan.

Sources said that top leaders of both parties were negotiating with each other and a seat-sharing pact was being worked out in the three poll-bound states. The Congress is likely to give as many as 30 seats to the BSP in MP as Congress state president Kamal Nath was finalising the deal with top BSP leaders.

Assembly polls in the three BJP-ruled states are being looked at as a kind of barometer test for the 2019 general elections next year.

Possibilities of a pre-poll tie up with the BSP came out in the open after a joint Opposition managed to trounce the BJP in three successive bypolls in UP in Gorakhpur, Phulpur and Kairana.

Earlier in Gorakhpur byelection, Samajwadi Party’s Praveen Kumar Nishad defeated BJP’s Upendra Dutt Shukla by 21,916 votes. Till then, Gorakhpur had been a BJP bastion with Uttar Pradesh chief minister Yogi Adityanath having represented the seat in Lok Sabha for a total of five terms. The BJP had also lost the Phulpur Lok Sabha seat which was represented by UP deputy CM Keshav Prasad Maurya. The SP candidates were backed by BSP and other regional parties.

The Congress on Friday officially said that it would work out different strategies with parties in states to ensure that there is no division of anti-BJP votes in the next general elections.

While there will not be any blanket approach in working out alliances or seat adjustments in various states, the basic object would be to ensure consolidation of anti-BJP votes, Congress spokesperson Abhishek Singhvi said.

He, however, remained non-committal on putting up a joint opposition candidate against Prime Minister Narendra Modi in Varanasi, saying it is “too early” and it was up to political parties to decide.

“The object will be everywhere, whether bipolar states or triangular and quadrangular states, to prevent vote division of the anti-BJP vote. This is what the BJP is terrified about,” he said.