100 candidates have responded to an advertisement posted on Facebook . 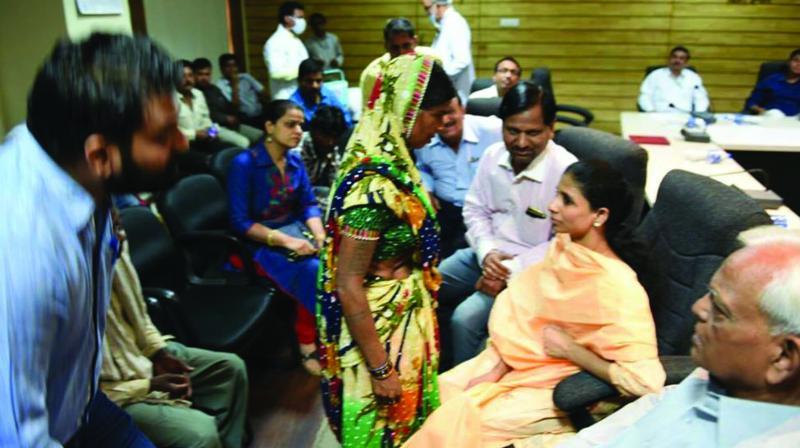 Geeta interacts with a woman who wrongly claimed that she was her mother.

Bhopal: Geeta’s story that, many believe, was told in Salman Khan-starrer Bajrangi Bhaijan, is all set to take a new twist this month.

The 25-year-old mute woman, who is still searching for her identity that she had lost 15 years ago when she strayed into Pakistan aboard the Samjhauta Express, is all set to choose her life partner in a “swayamvar” (groom selection exercise).

Geeta has given her consent to enter into the wedlock, but with a rider. Her life partner would be required not only to be her soul mate but also her companion in finding her parents.

“She has desired a ‘eight-phere’ marriage instead of the traditional seven-phere wedding, in which her groom will be required to take an extra ‘eighth vow’ to help her trace her parents,” said social activist Gyanendra Purohit from Indore in Madhya Pradesh.

Mr Purohit, along with a few others, was instrumental in convincing Geeta to start her family by tying the nuptial knot.

Geeta, who has been given shelter in an orphanage run by an NGO in Indore after she was brought from Pakistan to India in 2015,  was encouraged on May 23 this year by the local administration and a few social activists to screen the prospective grooms whom she would like to meet to select her life partner.

According to Mr Purohit, Geeta earlier insisted that marriage was not her priority at this stage. She wanted to trace her parents first and then consider starting her married life.

“What reply I will give to my parents, when I find them, if they ask me how could I marry without their sanction,” Mr Purohit quoted Geeta as having said.

She relented later and  set a condition that her groom must take a vow as “eighth phera” to help her find her parents after their marriage.

“She gave her consent to marry when she was assured that the groom will be asked to take the vow to find her parents in the form of an affidavit,” Mr Purohit disclosed.

Geeta was getting restless in the shelter home with the efforts to trace her parents yielding no results in the last three years.

“She often insisted to meet Salman Khan to request him to locate her family as the Bollywood star did for the little girl, the protagonist of Bajrangi Bhaijan, in the movie. She watched the movie many times and  started believing that Salman Khan alone could track down her parents,” said an official of the shelter home.

In February, she broke down before Indore district collector while pleading for a meeting with Salman Khan.

She had even reportedly tried to flee the shelter home on January 31 to launch a manhunt for her parents herself, sources said. Mr Jain, however, dismissed reports of her being upset for not being able to trace her parents.

“She is absolutely fine and enjoying her time with other inmates in the shelter home. She is also showing interest in the vocational training she has been undergoing in her rehabilitation centre,” said Mr Jain.

Around a dozen couples have so far come forward with the claim that Geeta is their daughter. But, they all were proved false.

The Union ministry of external affairs has heeded to suggestions from some experts that she could overcome her frustrations of not being able to meet her biological parents if she would marry and settle down in life.

Accordingly, the MEA has tasked Mr Purohit with the job of finding out candidates willing to marry her and send their profiles to the department to screen them.

“The MEA scrutinised the candidates and sent a list of 26 applicants to Indore district collector to ask Geeta to choose candidates of her choice to meet and finalise one of them,” Mr Purohit said.

Geeta has chosen 15 candidates whom she wants to meet individually before taking a decision. “We will arrange her meetings with the prospective grooms in the first week of June,” he added.

Of the 15 candidates, seven are hearing impaired and an equal number are normal. One candidate is orthopedically challenged.

The candidates included a B.Tech, a post-graduate and a priest. Five candidates are from UP, two from Gujarat, four from MP and one each from Kerala, Bihar, Rajasthan and Delhi.