Ramvilas Paswan also said that a wrong perception has been created about the Modi government being anti-minority and anti-Dalit. 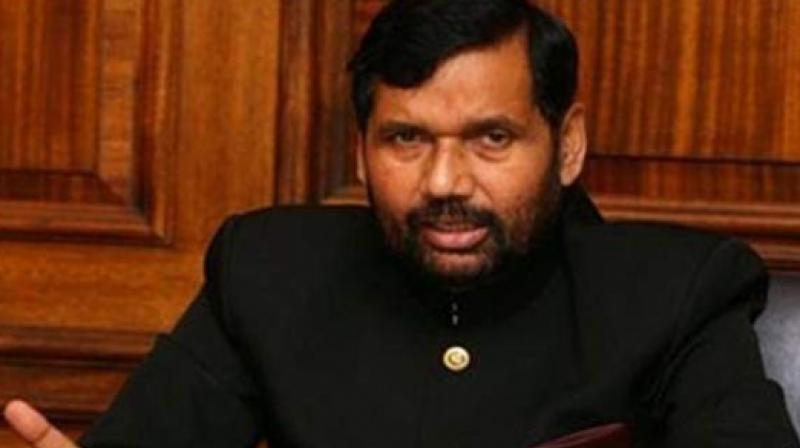 He suggested that the Narendra Modi government should have better communication to remove the wrong perception created against it. (Photo: File/PTI)

The Union Food and Consumer Affair Minister also said that a wrong perception has been created about the Modi government being anti-minority and anti-Dalit. This perception is completely wrong as the present government has done a lot for both the sections of society, said Paswan, who is the chief of the Lok Janshakti Party (LJP), an ally of the BJP.

"(RJD chief) Lalu Prasad in Bihar and (Samajwadi Party patriarch) Mulayam Singh Yadav in Uttar Pradesh have always treated minorities as their bonded labourers," he said during an interaction with editors of newspapers and channels in the Jharkhand capital.

"On the other hand the Narendra Modi government at the Centre has done real work to change their social status," Paswan, a prominent Dalit leader, said.

To a question about his party continuing in the ruling coalition in the 2019 general elections after results of bypolls went against the BJP-led NDA on Thursday, he said, "there is no question of changing sides."

"I have already made an experiment and minorities have voted for me and my party candidates even when my party fought the elections in alliance with the BJP. This is a completely wrong perception that whichever party will go with BJP, will lose minority votes," he said.

He suggested that the Narendra Modi government should have better communication to remove the wrong perception created against it.

It should also properly inform the society about its efforts for betterment of minorities and Dalits in order to counter the criticisms of the opposition, Paswan said.

He claimed, "I can bet that no government in the history of the country has taken so many concrete steps that would benefit the most backward segments of the society, including Dalits and minorities.

Paswan said, a hue and cry was made by the Congress in the aftermath of assault on some Dalits at Una in Gujarat two years ago.

"The party, which did little for seven decades except paying lip-service to its vote-bank of Dalits, Muslims and Brahmins, made it an election issue when the state went to polls more than a year after the incident took place," he said.

The LJP chief was of the opinion that the union government, BJP and all the other NDA allies should aggressively counter the "misinformation" campaign of the opposition, especially the Congress in view of the 2019 general elections.

He said the perception about the Modi government needs to be changed.

In response to a question about the allegations of Shiv Sena, an NDA ally, making statements against the BJP after losing the Palghar Lok Sabha bypoll in Maharashtra, he said, "They (Shiv Sena) should clearly decide whether they want to remain in the NDA or not".

He said it is the fault of the Shiv Sena because it has been indecisive about its own course.

In Maharashtra, the BJP and the Shiv Sena have common constituencies and if the people like the BJP, it is for the Shiv Sena to decide about its future course, Paswan said.

Paswan and Mansukh L Mandaviya, Minister of State of Road Transport and Highways, were in Ranchi to meet the editors on the completion of four years of the Narendra Modi government.