The commission in a statement observed that the content of news report, if true, amounts to gross violation of human rights of the victim. 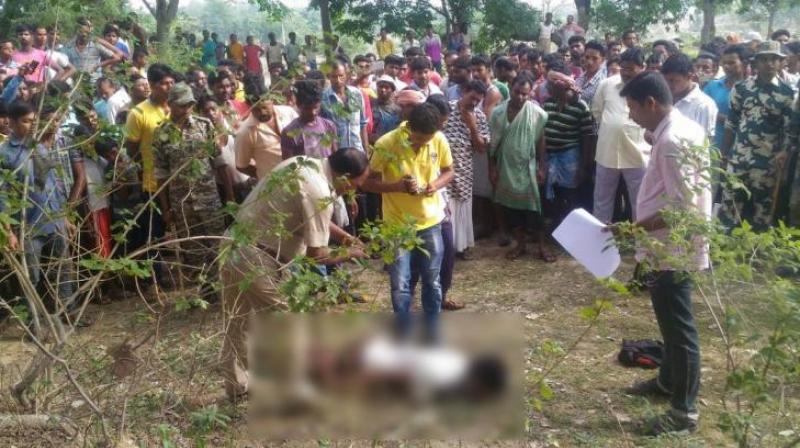 'Reportedly, a poster was also found affixed on the back of the body with a message written in Bangla -- "18 bachhor bayose BJP rajneeti. Ebar bojh" which means, 'BJP politics at the age of 18. Now take this',' the NHRC said, quoting from reports. (Photo: ANI | Twitter)

New Delhi: The NHRC has sent a notice to the West Bengal government over an incident in which the body of an 18-year-old person, whom the BJP claimed as its member, was found hanging from a tree near his house in Purulia, allegedly after he was "mercilessly beaten".

The commission in a statement on Friday observed that the content of the news report, if true, amounts to gross violation of human rights of the victim.

It has issued a notice to the West Bengal chief secretary, seeking a detailed report, the National Human Rights Commission said.

The DGP of the state has been asked to intimate the present status of investigation in the case and the steps taken to ensure that such incidents do not recur, the commission said.

They have been given four weeks to respond, it said.

The NHRC said it has taken suo motu cognisance of media reports that the youth, "belonging to the Dalit community in Purulia, was mercilessly beaten till he died".

Later, his body was found hanging from a tree.

"Reportedly, a poster was also found affixed on the back of the body with a message written in Bangla -- "18 bachhor bayose BJP rajneeti. Ebar bojh" which means, 'BJP politics at the age of 18. Now take this'," the NHRC said, quoting from reports.

Reportedly, he was a worker of BJP and he had called the family over telephone, saying he was abducted by a group of men on bikes, the commission said in a statement.

The rights panel also observed that India is a democratic country and difference of opinion and ideology are obvious in a multi-party democratic political system.

"Bloodshed in the name of political differences is neither desirable, nor acceptable in a civilised society. Brutal killings of party workers in such a manner are indicative of deficient law and order situation in the state, which does not allow rival political parties to exercise their political rights," it said.

The right to life of the poor Dalit victim has been grossly violated, which is a glaring instance that law enforcing agencies have failed to protect the precious human life, the NHRC observed.

According to a media report, carried on Thursday, violence continued in Purulia even after the Panchayat elections were over, it said.

"Several other local BJP leaders have been threatened after the BJP won many seats in the district.

The father of the deceased has alleged that his son was killed by the workers of the Trinamool Congress (TMC)," the commission said, quoting from reports.

The incident has also invited strong criticism of the TMC government from BJP chief Amit Shah, who had said the ruling dispensation had "surpassed the violent legacy of the communist rule" in West Bengal.