Sama Shabir has attributed her success to her jailed father. 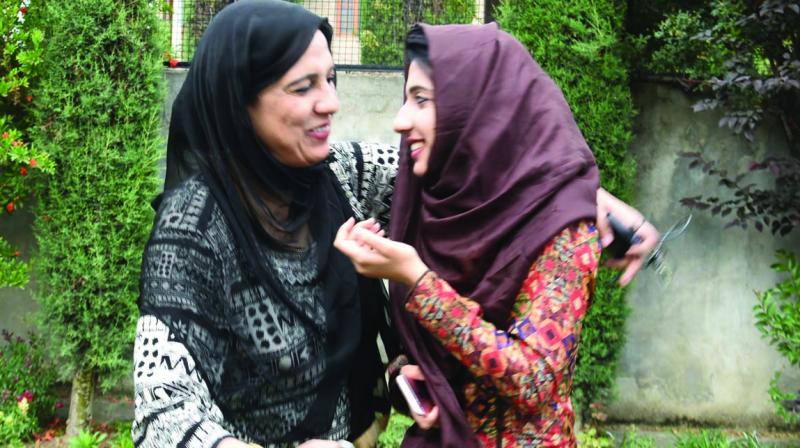 Sama Shabir with her mother

Srinagar: At a time when street battles between Kashmir’s stone-pelting youth and security forces have become almost a daily routine and there is growing trend of local boys joining the militants’ ranks, the wards of separatist leaders are doing fairly well in various board and university level as well as professional examinations.

Last week, Sama Shabir, the daughter of jailed separatist leader Shabir Ahmed Shah, won laurels by topping in the  state in the CBSE 2018 Class 12 exams. A student of Srinagar’s Delhi Public School, Sama secured 97.8 per cent marks winning her appreciation from various political leaders and other prominent personalities including her father's political opponents. Among those who took lead in felicitating her was chief minister Mehbooba Mufti, who tweeted, "Congratulations to Sama Shabir Shah for securing 97.8% marks in the class 12th  examination. Her hard work & determination has helped her overcome all odds & she is truly an inspiration for the youth of our state.”

Sama’s father is presently lodged in Delhi’s Tihar jail. He was arrested by the Enforcement Directorate last year in connection with an alleged money-laundering case. Shah, 64, has spent about 31 years of his life in various jails for espousing the “cause of freedom” and was declared “Prisoner of Conscience” by Amnesty International a couple of decades ago.

Congratulating Sama, DPS pro-vice chairman Vijay Kumar Dhar said, “It is a proud moment for all of us.”

Meanwhile, Sama’s distinguishing performance in the CBSE exams has once again underlined the debate over whether the youth of Kashmir should have pens, books and computers or stones and guns in their hands.

Many critics of separatist leaders have also posed the critical question: “When their own wards are concentrating on studies and excelling in exams, why should they seek to blemish the lives of ordinary Kashmiris by encouraging rather inciting them to turn to the gun or indulge in stone pelting?”

Separatist leaders, however, dismiss this criticism and point out that wards of some known faces in their echelons  too joined militant ranks in the recent past.

Junaid Ashraf Khan, son of Tehreek-e-Hurriyat chief and close confidante of Syed Ali Shah Geelani, is among those who left his Srinagar home in March this year to join Hizbul Mujahideen, said a separatist leader.

Sama has attributed her success to her jailed father. ‘“We’ve suffered enormously particularly during the past one year because of my father's incarceration. But then I thought to turn the sadness into strength and negativity into positivity. So whatever I have achieved is because of my father. I owe it to him only,”

However, she also felt disappointed for she could not talk to her father to share her joy with him.

“By now while entire world may have through social media, TV channels and newspapers come to know about it except baba, the most important person in my life. It is really painful for me,” she said.

“It was an emotional moment for Sama when she got the results in absence of her father. They didn’t even allow her to talk to her father on phone. She terribly missed him in this moment of glory,” she said.

Sama said she is now ready to pursue law to fight the injustices. “The people of Kashmir are suffering a lot of injustices and I want to fight those. I will be taking up law for that,” she said.