India   All India  02 Jun 2018  Srinagar CRPF charged after their van, attacked by protesters, runs over 3
India, All India

Srinagar CRPF charged after their van, attacked by protesters, runs over 3 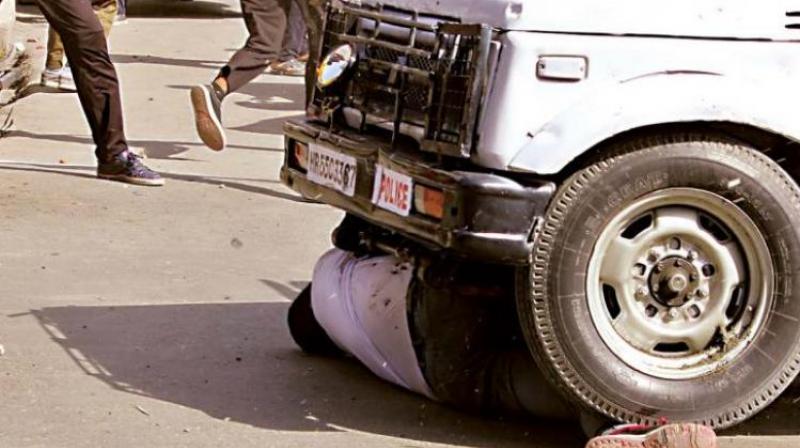 On Friday, a CRPF vehicle targeted by protesters in Nowhatta ran over three people in an attempt to get away. (Photo: H U Naqash)

Srinagar: Jammu and Kashmir Police has registered two FIRs against CRPF's Srinagar Unit over Nowhatta incident, wherein a stone-pelter was run over on Friday by a CRPF vehicle which was escaping a mob.

On Friday, a CRPF vehicle targeted by protesters in Nowhatta ran over three people in an attempt to get away. The incident triggered fresh protests and criticism for the government. One of the three who had received serious injuries, died later in the evening.

The incident in Srinagar's Nowhatta area, just days ahead of Union Home Minister Rajnath Singh visit to the valley, could dampen the centre's renewed efforts to reach out to Kashmiri youth after announcing the Ramzan truce with terrorists.

Alongwith reviewing preparation for the Amarnath Yatra due to begin on June 29, Home Minister Rajnath Singh’s another major focus during the visit is to signal his intent to engage with all stakeholders including the Hurriyat leaders.

Earlier they tied people to the fronts of jeeps & paraded them around villages to deter protestors now they just drive their jeeps right over protestors. Is this your new SOP @MehboobaMufti sahiba? Ceasefire means no guns so use jeeps? https://t.co/42W6vGAPVi

But the Jammu and Kashmir police tweeted that "a selective picture" did not present the "whole scene", a reference to the videos and pictures that showed the aggressive mob attacking the vehicle.

Abdullah's party described the pictures of a man being run over by a CRPF gypsy "haunting".

"The gypsy was attacked - that's a fact - yes. However, it's a failure of the local police in the area to have allowed a CRPF gypsy to pass through an almost 200 strong hostile crowd," National Conference spokesperson Junaid Azim Mattu tweeted, blaming the police for allowing the jeep to pass through a hostile crowd.

"Almost every single civilian casualty in Kashmir is due to continued, repeated failures at crowd control, sanitisation of encounter sites and policing blunders. It's not rocket science! You allow a CRPF gypsy to speed through a hostile crowd - didn't you know this could happen???," Mattu said.

The separatists had called a strike across Kashmir on Saturday to protest against the recent civilian killings.

(With input from agencies)