India   All India  02 Jun 2020  No respite from coronavirus menace as cases near 2 lakh mark
India, All India

No respite from coronavirus menace as cases near 2 lakh mark

India is now the 7th worst-hit nation by the novel coronavirus pandemic. 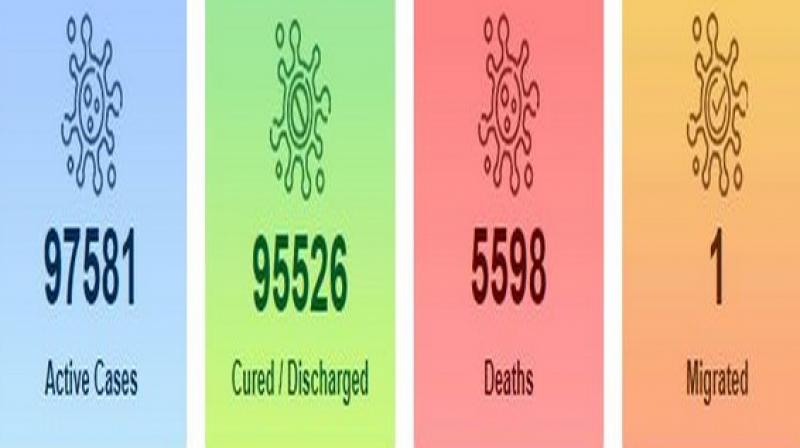 New Delhi: While Day 1 of Unlock 1 saw more economic activities picking up, there remained palpable fear among people in big cities like Delhi where the number of coronavirus cases have gone up substantially. According to union health ministry update on Tuesday, there were 8,171 new infections and 204 deaths as overall cases went up to 1,98,706.

The overall death toll in the country was 5,598. India is now the 7th worst-hit nation by the novel coronavirus pandemic. The number of active COVID-19 cases stood at 97,581 while 95,526 people have recovered taking India’s recovery rate to 48.07%.

Out of the 204 more deaths since Monday morning, 76 were in Maharashtra, 50 in Delhi, 25 in Gujarat and 11 in Tamil Nadu. Eight people each died of COVID-19 in West Bengal and Madhya Pradesh, followed by six in Telangana, and four each in Rajasthan and Uttar Pradesh. There were three more fatalities each in Bihar and Jammu and Kashmir, two in Andhra Pradesh, and one each in Haryana, Karnataka, Kerala and Uttarakhand.

While many states have decided to end most of the restrictions and even open up places of religions gatherings and big market places, Karnataka, Kerala do not want to rush. Karnataka has announced to extend the lockdown till June 30 while Kerala said it will take a call on June 8 on opening of religious places. Places like Thane in Maharashtra, too, have announced to keep the area shut till June 30.

Health experts expect a bigger spike in cases in the coming days due to lifting of restrictions and have advised state governments against opening of religious places at this time saying it would risk higher number of infections in view of greater density in such places. Some experts have also expressed that state governments are not testing enough.

Indian Railways from Monday has started its express mail services and it is expected that cases may rise due to the movement of passengers. Meanwhile, Indian Railways' first COVID-19 care centre consisting of 10 modified coaches with 160 beds has been deployed in Delhi. These coaches have been stationed at the maintenance depot of the Shakur Basti railway station. In addition to the 10 non-AC coaches with 160 beds, the COVID-19 care centre will have an AC coach for healthcare staffers, including doctors. The coaches were deployed on Sunday following a written request from the Delhi government.