Mumbai has over 3,336 sealed buildings of which 40 are located in Worli-Koliwada alone 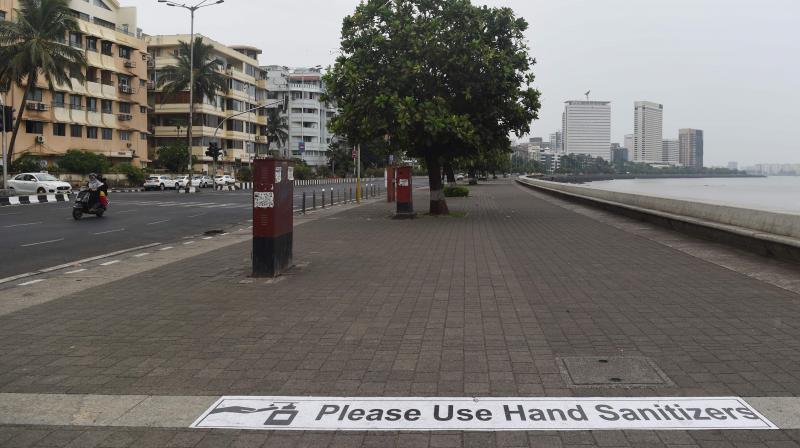 A sign reminding people to use hand sanitisers is seen ahead of the opening of Marine Drive to the public as the government eases restrictions imposed as a preventive measure against the spread of the COVID-19 coronavirus, in Mumbai. PTI photo

Lockdown restrictions have been lifted from 75 per cent of the areas under Worli-Koliwada, Mumbai’s first containment zone, which also reported the first Covid-19 death in the city, after over 60 days on Monday.

The civic body officials said only parts of Worli-Koliwada, where there are still active Covid-19 positive cases, are sealed, while relaxations are being allowed in the rest of the areas . Worli-Koliwada was declared a containment zone on March 29, a day after 4 positive cases were detected there. Worli-Koliwada, Mumbai’s first containment zone, will be de-contained in entirely in some days and, if all goes well, the fishermen there could soon be back in business too.

Worli-Koliwada is part of G-south, one of the city’s worst-affected municipal wards with multiple containment zones. The area, covering Worli, Prabhadevi, and Lower Parel, has reported 2,008 Covid-19 positive cases so far. Around 50 per cent of the patients, or 999, have recovered so far and the rest are still undergoing treatment.

Shiv Sena Yuva leader and member of the Legislative Assembly (MLA) from Worli-Koliwada, took to Twitter on the easing of lockdown restrictions in his constituency from Monday. “Worli Koliwada, where many Covid-19 positive patients were found and a containment zone was created, has now been partially de-contained. Only places with active patients are sealed.”

“Initially, we encountered several problems here, as this was the first containment zone. However, it became a model for fighting Covid-19. I thank the residents for their cooperation,” he further tweeted.

Meanwhile, Maharashtra on Monday reported 2,361 new Covid-19 cases and 76 deaths, taking the overall case count to 70,013, and the number of fatalities to 2,362. A total of 779 patients were discharged from hospitals in the day, taking the tally of the recovered cases to 30,108 so far. The number of active cases in the state now stands at 37,543.

Out of the total deaths, 54 deaths occurred in the last two days and the rest are from May 14 to May 28. Out of the 22 deaths in this period, nine were recorded in Mumbai, five in Navi Mumbai, three in Aurangabad, two in Raigad and one each in Beed, Mira-Bhayandar and Thane.