Passengers were seen arguing that the charge must be levied on tickets booked after July 1, and not on those booked before GST rollout. 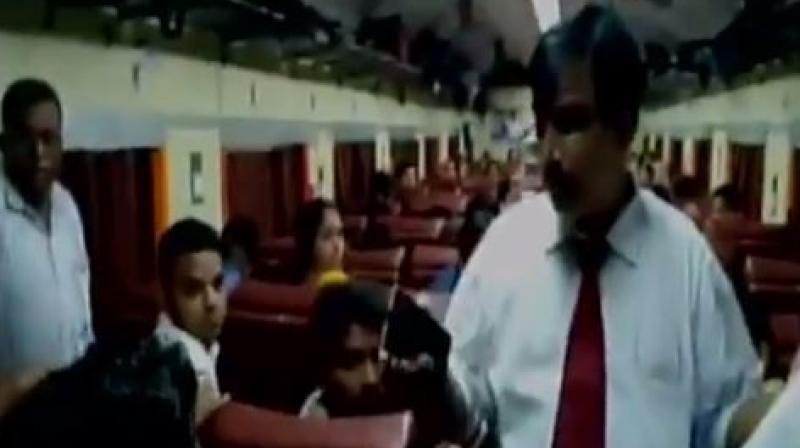 In the video depicting chaos that went viral online, the Travel Ticket Examiner (TTE) of Queen Express was seen asking passengers to pay an additional fare of Rs. 20 per ticket on account of instructions given to him by government officials. (Photo: ANI)

Surat (Gujarat): In a series of arguments which prevailed after the midnight launch of the Goods and Services Tax (GST), passengers of Gujarat's Queen Express train refused to pay the extra fee that was reportedly levied in lieu of the GST.

In a video depicting chaos that went viral online, the Travel Ticket Examiner (TTE) of Queen Express was seen asking passengers to pay an additional fare of Rs. 20 per ticket on account of instructions given to him by government officials to do so, citing the GST to be the reason for the same.

Passengers were seen arguing that the charge must be levied on tickets booked after July 1, and not on those booked before the roll out of the new tax regime, and refused to pay the additional fee. Passengers also demanded to see an official circular from the Centre.

Amid what was seen as 'festive fervor' post the midnight rollout of the GST, protests broke out in various pockets of the nation, deeming the GST to be one that will 'loot the nation'.

In Bhopal, some Congress Party workers and traders burnt copies of the GST norms, saying these taxations only existed during the colonial times.

"How can you tax pooja items and coffins? This is unacceptable. It is going to be bad for traders and farmers, with prices of goods going up. Congress will stand by traders and make sure their demands are met. I would request the President to re-consider," a protestor said.

Meanwhile, in Agra, effigies were burnt and slogans were raised against Prime Minister Narendra Modi and Finance Minister Arun Jaitley for the launch of the 'incomplete' taxation system.

Drawing parallels to the premature delivery of a baby, protestors and traders criticised the ruling dispensation for lack of uniformity and tax rates, adding that traders would accept the GST only once it has been chalked out completely.

"You are making traders become ghulams (slaves) again," one of the protestors asserted.

Ending more than 11 years of hectic argument among the Centre and the states, the GST, which was rolled out at the stroke of midnight, is being said to completely transform the indirect taxation landscape in the country involving both the Central and State levies.

In a departure from the normal practice, GST will be administered together by the Centre and states.

The biggest tax reform since independence - GST - will pave way for realisation of the goal of "One Nation - One Tax - One Market".

It will benefit all the stakeholders namely industry, government and consumer as it will lower the cost of goods and services give a boost to the economy and make the products and services globally competitive, giving a major boost to ' Make in India' initiative.

Under the GST regime, exports will be zero-rated in entirety unlike the present system where refund of some of the taxes does not take place due to fragmented nature of indirect taxes between the Centre and the States.

However, GST will make India a common market with common tax rates and procedures and remove economic barriers. GST is largely technology driven and will reduce the human interface to a great extent. GST is expected to improve ease of doing business in India.