This is to inform all concerned that we will change the picture in subsequent editions of the book, the publisher said on social media. 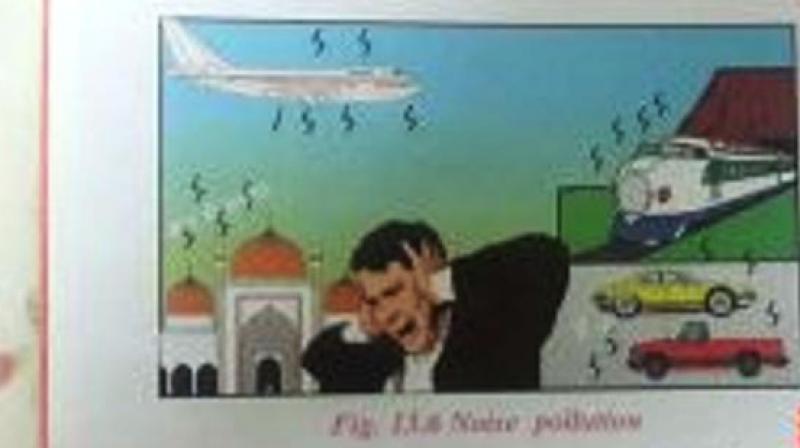 New Delhi: An image in a class VI textbook taught in ICSE schools depicting a "mosque" as a source of noise pollution has sparked outrage on social media, prompting an apology from the publisher and the promise that the picture would be removed in subsequent editions.

The ICSE, however, maintained the board did not publish or prescribe textbooks, and that schools had to deal with the issue. The science textbook, published by Selina Publishers, has a chapter on the causes of noise pollution. The picture, shared widely on social media, shows a train, car, plane and a mosque, all with symbols depicting loud sound, next to a man grimacing and shutting his ears.

Netizens have now launched an online petition demanding the book be withdrawn. The outcry drew an apology from the publisher.

"This is to inform all concerned that we will be changing the picture in subsequent editions of the book," publisher Hemant Gupta said on social media sites. Gupta said the diagram on page 202 of its publication, Integrated Science, consisted of "a structure resembling a portion of a fort and other noise producing objects in a noisy city". "We do apologise if it has hurt the sentiments of anyone," he said.

Gerry Arathoon, chief executive and secretary of the Council for Indian School Certificate Examinations, said the board does not publish or prescribe textbooks for schools. "If any book with objectionable content is being taught at certain schools, it is for schools and publisher to ensure such a thing does not happen," he told PTI.

Bollywood singer Sonu Nigam had stoked a controversy in April 2017 when he said he was woken up by the sound of "azaan" -- early morning calls for prayers from mosques -- amplified by loudspeakers. There have been several incidents of controversial content being found in school textbooks in recent months.

Excerpts from a class XII Physical Education textbook taught in some CBSE schools had kicked up a furore for defining a figure measurement of 36 24-36 as the "best body shape for females". A class IV environmental science textbook that suggested killing a kitten as part of an experiment went viral on social media, forcing the publisher to withdraw it from the market earlier this year.