The clash against Bangladesh is a potential banana skin that India must be wary of. 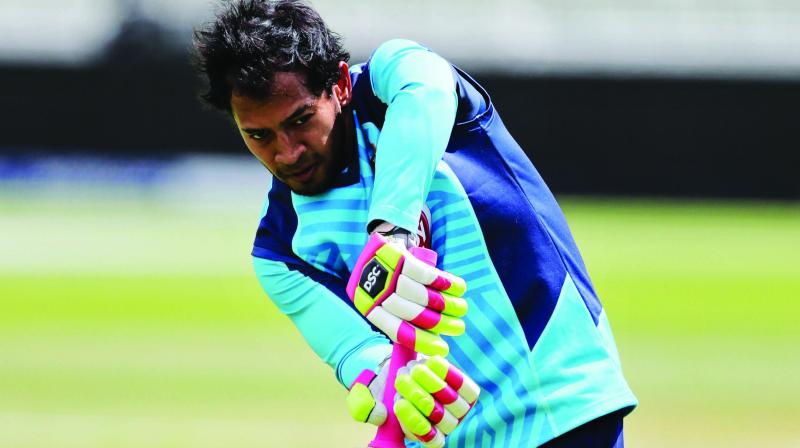 Mushfiqur Rahim of Bangladesh bats during a training session at Edgbaston in Birmingham on Monday. (Photo: AP)

Birmingham: The business end of the World Cup league stage is turning out to be an adventurous journey for India. After being beaten and bruised by the Lions (England), Virat Kohli & Co. are out to tame the hungry Tigers of Bangladesh here at Edgbaston on Tuesday.

Billed as one of the favourites, India are yet to book their semifinal berth. It will be their second match in three days at the same venue and their worries have only compounded with Vijay Shankar, nursing a fractured toe, packing his bag for an agonising trip back home. The status of KL Rahul’s fitness after hurting his back during the England innings hasn’t been made public.

The clash against Bangladesh is a potential banana skin that India must be wary of. For passionate Bangladesh fans, beating India in the World Cup would give more thrill than winning the global tournament. Bangladesh have already experienced it once, in 2007, by pulling off one of the biggest upsets and improving significantly ever since then. The protagonist of the stunning triumph at Port of Spain, Mashrafe Mortaza, went on to become a cult hero. He is the current captain and also a member of the Bangladesh parliament.

Bangladesh need to win both their remaining matches, against India and Pakistan, and then hope for a favourable outcome from New Zealand’s next fixture against England. Their net run-rate, which is slightly better than that of Pakistan, will help them in the standings if teams tie for the fourth spot.

Bangladesh’s batting heavily relies on their talismanic all-rounder Shakib Al Hasan. They have consistently posted big totals, but the bowling department spearheaded by skipper Mortaza hasn’t fared well. Mortaza has been wicket-less in five of the six matches played so far and could only once complete his full quota of 10 overs.

Though the lacklustre performance of Indian spinners against England can be brushed aside as an off-day, the uncertainty of No.4 batsman and the middle-order woes need to be addressed before heading into the all-important knockout stage. If batting coach Sanjay Bangar’s words are anything to go by, Rishabh Pant would continue to bat at No.4. Kedar Jadhav who has drawn a lot of flak for his failure to accelerate the scoring rate could make way for Ravindra Jadeja who offers a solid bowling option apart from his livewire fielding.

Bangladesh bowling coach Courtney Walsh believes that wickets with the new ball would expose the vulnerability of India’s batting lineup. “It’s key for them to use the new ball. We have to assess what’s going to happen here in Birmingham. If the wicket’s going to turn then it’s best for us to have a spinner bowling earlier as well trying to get an early wicket. But obviously with the new ball if there is going to be any swing or movement, we would want the seamers to use it as well. So, I think it’s on the day what the surface has to hold and how well we react on the day,” said Walsh.