India on Wednesday registered 18,653 fresh cases of the coronavirus, taking its overall tally to 5,85,493 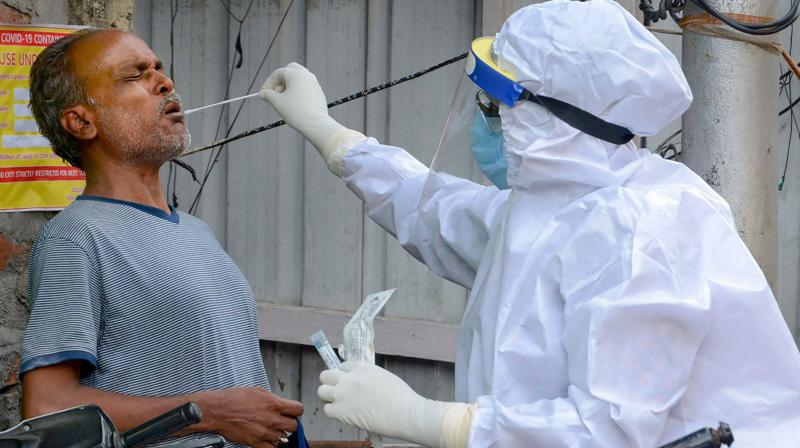 A health worker collects swab samples of a man for COVID-19 testing in a containment zone amid lockdown in Guwahati. PTI

A day after Prime Minister Narendra Modi warned people not to be negligent and casual with regard to taking precautions to protect themselves and others from the coronavirus, the Central government has directed all states and Union territories to significantly ramp up their testing for the virus.

Union health secretary Preeti Sudan and Indian Council for Medical Research director-general Balram Bhargava have written to all states and UTs to stay that at some places the capacity utilisation of the testing labs, particularly the ones in the private sector, was grossly sub-optimal.

They also said that the labs should not insist on a prescription from government doctors as this further delays testing and that any qualified medical practitioner can prescribe a test.

As of Wednesday, 88,26,585 samples have been tested, but the Union health ministry feels that this is still insufficient given the magnitude of the pandemic. The officials said that though the mortality rate has been much lower in India compared to other countries, the virus has been found to be spreading to newer areas now. The two officials have said camps and mobile vans should be used to reach out to more people.

India on Wednesday registered 18,653 fresh cases of the coronavirus, taking its overall tally to 5,85,493. In the last 24 hours, 507 deaths were reported across the country, and the total number of fatalities due to the deadly virus is now 17,400.

As on July 1, there are 1,27,864 recovered cases, which is more than the active Covid-19 cases, which has resulted in the recovery rate further increasing to 59.43 per cent. During the last 24 hours, 13,157 patients have been discharged from hospitals across India, taking the cumulative figure to 3,47,978. At present, there are 2,20,114 active cases, and all are under medical supervision.

Meanwhile, following the visuals of dead bodies of Covid-19 infected persons being tossed into pits, eminent persons like Rajmohan Gandhi, Harsh Mander, Sharmila Tagore, Nayantara Sehgal and a few others wrote an open letter to the Indian people, saying: “Dignified fare-well to Covid-19 deceased is possible, no reason why loved ones can’t be given a respectful farewell.”