The government was not giving priority to the medical sector or issues of immediate concern, CJI said 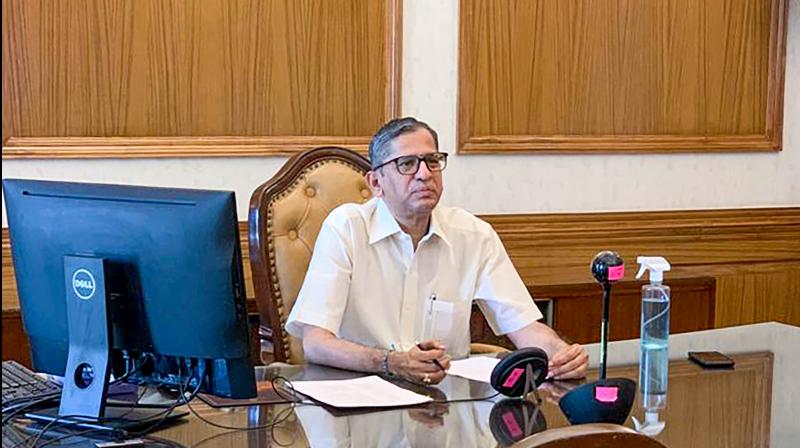 Studies, Justice Ramana said, had shown that knowledge and awareness was negligible in rural India on diabetes. (PTI)

Hyderabad: Chief Justice of India N.V. Ramana said huge economic losses inflicted by the Covid-19 pandemic on India, and across the globe, “should wake us up to the reality that there is no substitute for a free and universal public healthcare system that focuses on disease prevention.”

“The government,” the Chief Justice of India said, was “not giving priority to the medical sector or issues of immediate concern.”

Launching the ‘Defeat Diabetes’ campaign by the Research Society for the Study of Diabetes in India on Thursday, Justice Ramana, in a virtual address, said if diabetes was to be battled effectively, the state had to come up with a comprehensive policy framework in which awareness campaign became a part of diabetes eradication endeavours.

“For the programme to be successful, it needs to be integrated into a free and universal public healthcare system. Left to individuals, we will never reach the goal,” Justice Ramana said.

On the rising diabetes cases in India, he said, “One must pause and wonder about the implications of this on the already strained healthcare system in the country. Formulating public healthcare policies based on intense scientific research is needed.”

Studies, Justice Ramana said, had shown that knowledge and awareness was negligible in rural India on diabetes. The knowledge gap leads to myths like it is the obese, those who consume more sugar, are the ones who get the disease, or that it is contagious and the one that says women are immune to the disease.

Quoting the Telugu saying ‘Aarogyamey mahabhagyam’, the Chief Justice of India said it was the universal truth that health was wealth. “Any investment is justified to acquire this wealth because only a healthy nation can become a wealthy nation,” he said.

Here are a “few thoughts and facts for all stakeholders to ponder over,” he said, adding, “Our doctors are being attacked while on duty. Why is it that our medical professionals are at the receiving end for someone else’s failure?”

This, the Chief Justice said, was because of “insufficient number of medical professionals, insufficient infrastructure, lack of medicines and outdated technologies.” The government was not giving priority to the medical sector or issues of immediate concern, he said.

Justice Ramana also said it was “saddening to see how a good qualified doctor cannot start a hospital on his own and survive. Why is profiteering by corporators being blamed on doctors? After years of learning, doctors struggle to get decent salaries.” The medical bodies and concerned agencies in the government should put their heads together to address these concerns, he added.

“Only then,” the Chief Justice of India said, “can we sincerely greet the doctors on the first of July every year.”

Calling doctors “living Gods,” Justice Ramana said no other professional could render sacrifices as valuable as those made by doctors. IMA data suggested that more than 798 doctors lost their lives in the second wave of pandemic, he said, adding that his heartfelt sympathies were with the families of medical professionals and health workers who lost their lives while saving the lives of patients during the pandemic.