India has joined select club of countries to have capability to produce aircraft which can operate from an aircraft carrier. 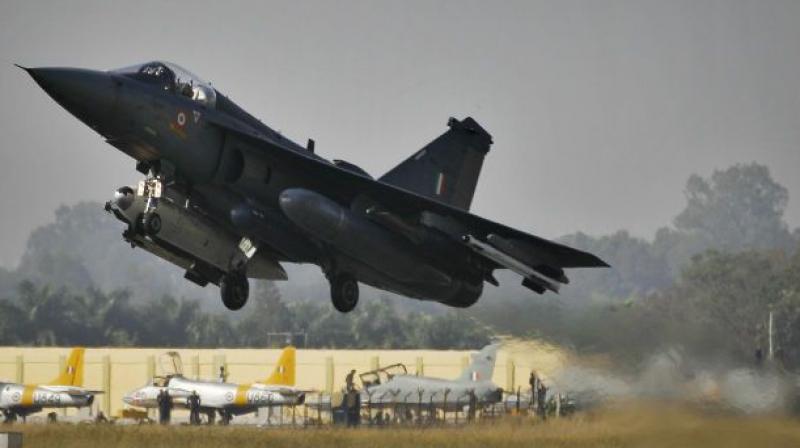 An official said a series of further tests to check landing and refuelling of the aircraft will be carried out in the next few months. (Photo: File)

Bengaluru/New Delhi: The naval version of the indigenously built Tejas Light Combat Aircraft on Thursday underwent a series of successful tests to check its capability to land on an aircraft carrier, officials said.

"India has joined a select club of countries including US, Europe, Russia and China to have the capability to produce aircraft which can operate from an aircraft carrier," an official said. He said a series of tests including "taxi-ins" of the jet was carried out on a naval platform in Goa, in a significant milestone for the development of the naval version of the jet.

The official said a series of further tests to check landing and refuelling of the aircraft will be carried out in the next few months.

Initially, the Indian Air Force placed an order with the HAL for 40 Tejas aircraft.

In December last year, the IAF began the process to procure another batch of 83 Tejas aircraft at a cost of over Rs 50,000 crore.

About Thursday's tests, the offical said the LCA naval prototype 2 (NP2), piloted by Capt Shivnath Dahiya safely executed the first contact of the "arrestor hook system" at moderate taxi-in speeds at a shore based test facility in Goa.

"This is the first of a series of engagement planned at proving the arrestor hook capability," said Chief Managing Director of Hindustan Aeronautics Ltd T Suvarna Raju.

The exercise was monitored closely by the Landing Signal Officer commodore J A Maolankar and Test director Group Capt A Kabadwal (Retd), the Bengaluru-based HAL said in a release. HAL said its design wing, Aircraft Research and Design Centre, has designed and developed the arrestor hooksystem for ship deck operations of LCA's Naval version.

The aircraft had been operating at INS Hansa Goa since July 28 after verification of the in-air operation of the system here earlier this month, the release said.

Another official said detailed carrier compatibility trials (CCT) of naval aircraft are slated to be carried out at shore based test facility soon.