The Army Chief also visited the Army Goodwill School at Mazbug outside the Northwestern town of Sopore to interact with the students and staff. 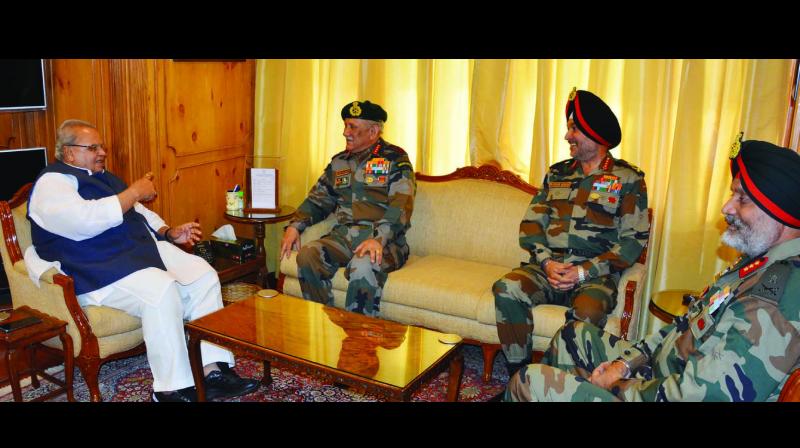 Srinagar: Army chief, general Bipin Rawat, on Thursday held a series of meetings with top military commanders here to review the security situation in Kashmir Valley and along the Line of Control (LoC) which has witnessed exchanges of heavy fire between the facing troops over the past few days.

One such meeting was held at Srinagar’s Badami Bagh Cantonment during which the Corps commander briefed him on the overall situation in the valley and major operational, informational, logistical and administrative issues involving the Corps.

Gen. Rawat, who is on a two-day visit to Kashmir, earlier visited the Army formations and units deployed in Northern parts of the valley. He was briefed by the local Army commanders on the prevailing security situation in the border districts of Kupwara, Baramulla and Bandipore and the measures initiated by the Army to ensure close coordination with all government agencies towards maintaining vigil and peace in the valley, a defence spokesman here said.

“During his interaction with the soldiers on the ground, he lauded them for their high levels of morale and motivation,” the spokesman said. He added that the Army chief reinforced the need “for remaining prepared to meet emerging security challenges effectively”.

The Army Chief also visited the Army Goodwill School at Mazbug outside the Northwestern town of Sopore to interact with the students and staff.