The SC lawyer's complaint was filed 'for ill-health, severe mental agony and other hardships' faced from 'food poisoning' in October 2014. 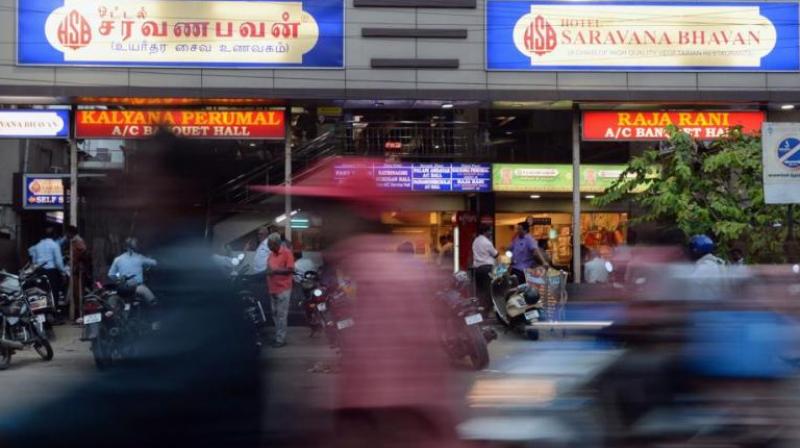 He contended that initially, he found strands of hair in the food served to him, and upon taking it up with the outlet, was provided with an alternative meal. (Photo: AFP)

Chennai: A consumer disputes forum has directed popular south Indian chain of restaurants Saravana Bhavan to pay Rs 1.10 lakh to a Supreme Court advocate as compensation for alleged deficiency in serving food to him.

The recent order issued by the Tamil Nadu State Consumer Disputes Redressal Commission here directed the hotel to pay Rs one lakh as "compensation for mental agony" suffered by the complainant SK Saamy, besides Rs 10,000 as
cost of litigation.

In his complaint, Saamy prayed for total compensation of Rs 90 lakh "for ill-health, severe mental agony and other hardships" faced from "food poisoning" in
October 2014, after he consumed food at the restaurant's Anna Salai outlet in the city.

He contended that initially, he found strands of hair in the food served to him, and upon taking it up with the outlet, was provided with an alternative meal.

However, a few hours after taking the food, he started feeling severe stomach pain, vomiting and nausea, besides developing fever and rashes on his body, Saamy said.

He also said he was later admitted to a government hospital ICU ward "and according to the doctor, was suffering from food poisoning."

He charged Saravana Bhavan with being "guilty of having served defective food," and prayed for a compensation of Rs 60 lakh for "deficiency in service" and another Rs 30 lakh for ill-health and mental agony.

However, the Commission in its order allowed him a compensation of Rs one lakh, saying fixing such a sum "would meet the ends of justice in this case."

"In the result, the complainant is allowed in part and the opposite party (Saravana Bhavan) is directed to pay Rs one lakh to the complainant as compensation for mental agony and other hardships and also Rs 10,000 as cost of litigation," the Commission said.