India   All India  02 Aug 2019  Video: Gujarat cop carries baby girl on his head as he wades through neck-deep water
India, All India

Video: Gujarat cop carries baby girl on his head as he wades through neck-deep water 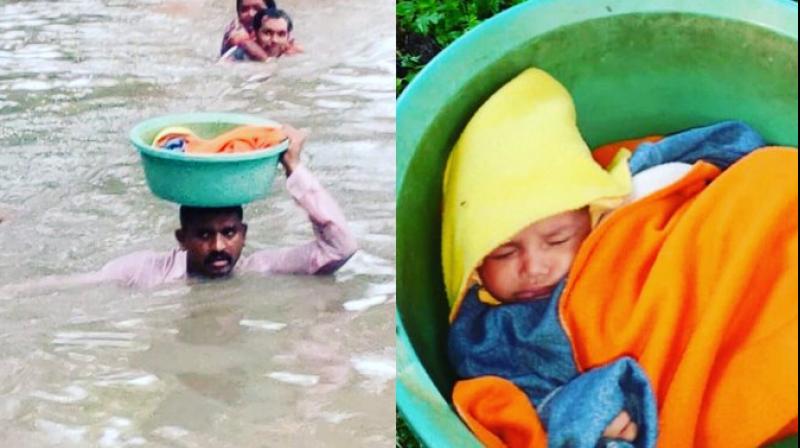 On learning about flooding of the locality, a police team rushed to the spotand requested people to move to safer places, he told PTI.(Photo: Twitter)

Vadodara: As torrential rain flooded Vadodara in central Gujarat, a policeman saved the life of a baby girl by carrying her on his head through neck-deep water in the wee hours of Thursday.

On learning about flooding of the locality, a police team rushed to the spotand requested people to move to safer places, he told PTI.

"I and other members of the team had to walk through flooded roads to reach Devipura. We tied a rope to a pole so that people could move by holding on to it as the water was neck-deep," he said.

"We learnt that a baby girl and her mother were trapped in a flooded house. I asked the woman to give us a plastic tub because it was difficult to place the girl on my arms safely," Sub-inspector Chavda said.

"We put some clothes and a bed-sheet in the tub and put the child in it. I placed the tub on my head and walked through five feet-deep water for 1.5 km to take her to a safer place. The mother was also rescued," he said.

The city received an unprecedented 499 mm of rain in 24 hours till 8 am on Thursday morning.