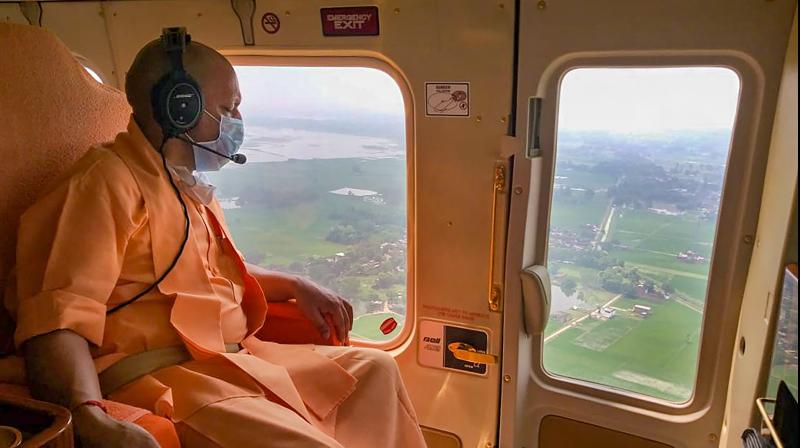 UP chief minister Yogi Adityanath did an aerial survey of the flood hit regions of Uttar Pradesh. PTI photo

Over 60 villages in Uttar Pradesh's Bahraich district have been inundated following the release of water by Nepal from its three barrages into rivers, a district administration official said on Sunday.

The release of water has affected over 1.50 lakh people and damaged 171 houses, he said, adding National Disaster Response Force personnel have been deployed in the area to rescue people.

"Following the release of lakhs of cusec of water by Nepal, at least 61 villages in the district have been inundated. The administration is providing relief to the affected people," Additional District Magistrate Jai Chandra Pandey said.

He added that 61 villages located in Kaisarganj, Mahsi and Mihipurva tehsils with a population of over 1.50 lakh have been affected.

"The condition is very bad in seven villages. As many as 131 kutcha houses have been damaged. Twenty-three flood posts have been made. Apart from this, one motorboat, 179 boats, one platoon of flood PAC and NDRF have also been pressed into service," Pandey said.

He also said 48 medical teams along with veterinary teams have also been deployed for relief work.

Medical facilities, vaccination of animals, tarpaulin sheets and food packets are being distributed, he added.

"About 3.15 lakh cusec water was released into rivers from Sharda, Girijapuri and Saryu barrages. The levels of rivers at these places were below the danger mark, but Ghagara was flowing 108 centimetres above the danger mark at Elgin bridge. Along with the barrages, the embankments are also being constantly monitored," said Executive Engineer (Flood) Shobit Kushwaha.