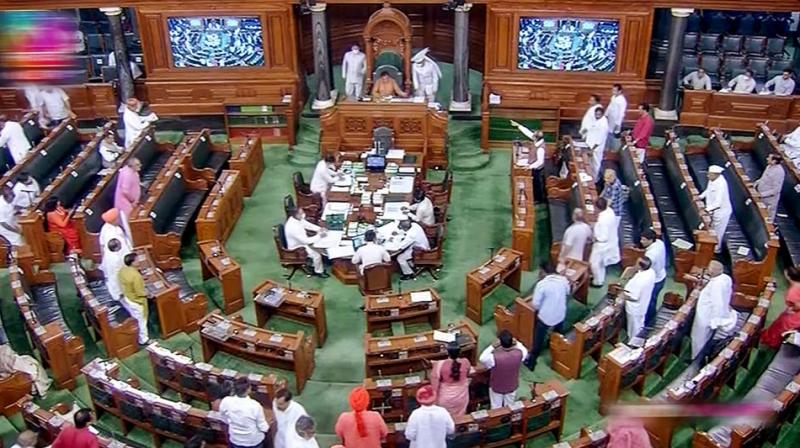 Members in the Lok Sabha during Monsoon Session of Parliament, in New Delhi. (Sansad TV/PTI Photo)

NEW DELHI: The deadlock in Lok Sabha ended on Monday after the suspension of four Congress MPs was revoked. Congress MPs Manickam Tagore, Jothimani, Ramya Haridas and T.N. Prathapan, who were suspended for the session after they waved placards during a protest in the House, walked in to participate in the discussion under Rule 193 on price rise.

As the House passed the motion revoking their suspension, Lok Sabha Speaker Om Birla said that such protests lower the dignity of the House and must not be repeated. During the discussion on price rise, members raised issues of rising fuel prices resulting in inflation.

Finance minister Nirmala Sitharaman said that despite global issues like Covid, Ukraine-Russia war, the Indian economy is robust and inflation is well within 7 per cent.

She said there is zero probability of India slipping into stagflation or recession as MPs expressed concerns that India may face an economic crisis like Sri Lanka. “On Saturday, Raghuram Rajan (ex-RBI governor) said ‘RBI has done a good job in increasing foreign exchange reserves, insulating India from problems being faced by neighbouring countries such as Pakistan and Sri Lanka’.

Differentiating India from its vulnerable neighbours, Raghuram Rajan further added ‘New Delhi is less indebted’, calling it a good sign,” Ms Sitharaman said. However, as the FM countered Opposition points, the Congress, DMK and other MPs walked out before the FM could complete her reply. Citing GST and macro data, Sitharaman said the Indian economy is getting robust.