Sources said illegal and over-extraction of minerals has picked up in at least 11 mines in Joda mining circle. 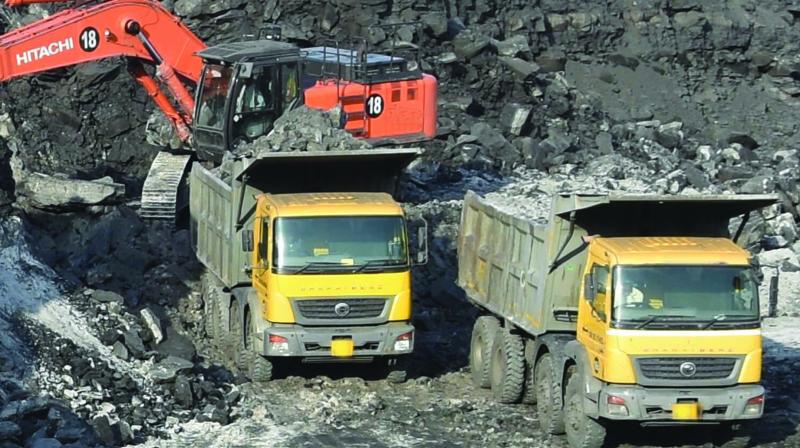 Fresh spell of transportation, especially of iron ore, has begun in the mineral-rich districts in the state.

BHUBANESWAR: As the NDA government at the Centre sits over the Justice M.B. Shah Commission report that brought to the fore “blatant loot” of mineral resources of Odisha to the tune of Rs 3 lakh crore under the nose of state administration, fresh spell of transportation, especially of iron ore, has begun in the mineral-rich Keonjhar and Sundergarh districts.

Nearly fifteen to twenty thousand trucks and trailers have allegedly been engaged in transportation of the mineral wealth, indicating “involvement” of some powerful politicians, bureaucrats and mines owners.

“Knowing well that lease terms of a section of mines are going to expire on March 31, 2020, the leaseholders have started extraction of high-grade ore, leaving behind substandard grade or ore. This will lead to serious environmental pollution in Keonjhar district,” Mr Majhi warned.

Sources said illegal and over-extraction of minerals has picked up in at least 11 mines in Joda mining circle.

The reason for over extraction in these mines is that their lease terms are expiring on March 31, 2020. The mineral transporters have engaged 33-tonne capacity 22-wheel trucks and trailers from Punjab, Rajasthan, Tamil Nadu and Karnataka, sidelining the local 12-wheel trucks having carrying capacity of 15 tonnes.

According to Joda Truck Owners’ Association general secretary Rabinarayan Das nearly 20,000 trucks are now plying in Keonjhar districts. Of them, at least 10,000 trucks are given mineral loads every day on rotation basis which they deliver at Paradip and Gopalpur ports. A section of trucks also delivers the minerals to some private steel plants inside the state.

Sources informed that though the 22-wheeler trailers having National Permits (NPs) cannot transport iron ore inside Odisha, some of them are doing the same by fraudulently availing Temporary Permits (TPs) from other states.

Apart from Joda circle, huge quantity of iron ore is also being lifted from Koida sector in Sundgar district. Nearly 5,000 trucks and trailers have been engaged to transport the mineral.

Plying of heavy trucks and trailers has caused serious damage to the physical infrastructures, including roads, sub-roads and bridges in the entire Keonjhar district. Congestion of the heavy vehicles has also made it impossible for mobility of common people on national highways and sub-roads.

“Sometimes, ambulances carrying serious patients fail to reach hospitals. As a result, patients die on the way. School buses also find it difficult to ferry the students on time.

State steel and mines minister Prafulla Kumar Mallick feigned ignorance on plying of such a massive number of trucks and trailers in Keonjhar and said it was the responsibility of the transport department to take care of the matter.

“I don’t think there is illegal transportation of minerals. All I can say is that it is the duty of the transport department to ensure rational movement of vehicles in a particular zone. However, I will look into the matter,” said Mr Mallick.

According to noted social activist and veteran journalist Rabi Das, Justice MB Shah Commission of Inquiry had in its reports to the Union government had strongly recommended for a CBI probe. However, despite the previous Manmoahn Singh government approving the report, the Modi government is yet to take a firm stand on it.

The CEC, in its interim report, revealed that a large number of mines operated in Odisha after the expiry of mining lease period. It found that at least 163 mining leases operated without the requisite approvals under the Forest Conservation Act, 1980; environmental clearances, Air and Water Act or approved mining plans.

The CEC also found that out of the 596 mines, as many as 307 mines consisted of either wholly or partly forest areas. Of the 307 mines with forest areas, 104 mines including expired mining leases were found operating.

The Odisha government, in its reply furnished to National Mines Tribunal (NMT) in 2013, had admitted the illegalities committing in mining activities and stated that it had slapped Rs 65,000 crore penalty on 196 mine owners who allegedly indulged in illegal and over-extraction of minerals, mainly iron ore. Challenging the state government decision to impose penalty, many mines owners have gone to the court.

However, the state government’s apathy in pursuing the case has resulted in poor recovery of the penalty. Besides, lack of will on the part of the political parties which once promised “logical action” on this scam seems to have sealed all possibilities of this mega scam getting unearthed and culprits being brought to book.